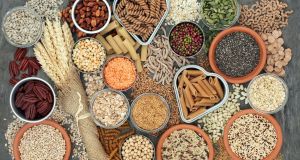 Eating more fibre, found in wholegrain cereals, pasta and bread as well as nuts and pulses, will cut people’s chances of heart disease and early death, according to a landmark review commissioned by the World Health Organization.

The authors of the review, which will inform forthcoming WHO guidelines, say their findings are good news – but incompatible with fashionable low-carb diets.

The research is led by Prof Jim Mann’s team at the University of Otago in New Zealand, who also carried out the major review that informed WHO guidance on curbing sugar in the diet, leading to sugar taxes around the world.

Sugar is a “bad” carbohydrate, but fibre is found in “good” carbohydrates such as wholegrain bread and oat-based muesli. However, the overwhelming backlash against sugar has led to popular diets that reject carbohydrates, including the fibrous sort that can, say the scientists, save lives.

Mann said the research “does contribute to the debate considerably. Here we have got very strong evidence that a high-fibre diet, which for the majority of people is at least high-ish in carbohydrates, has an enormous protective effect – a wide range of diseases including diabetes, cardiovascular disease and cancer benefit from a high-carbohydrate diet.”

But he said it would not end the “diet wars”, because there were so many vested interests involved. “It’s twofold. There is the commercial vested interest, which there is an enormous amount of from chefs and celebrity chefs and so on. And there is also the professional vested interest.” This included some doctors and scientists, he said.

The review found that we should be eating at least 25g to 29g of fibre a day, with indications that over 30g is even better. Most people in the world manage less than 20g. Among those who ate the most fibre, the analysis found a 15-30 per cent reduction in deaths from all causes, as well as those related to the heart, compared with those eating the least fibre.

Coronary heart disease, stroke, type 2 diabetes and colorectal cancer were reduced by 16-24%. The results mean 13 fewer deaths and six fewer cases of coronary heart disease for every 1,000 people who eat high-fibre foods compared with those who do not.

“Fibre-rich whole foods that require chewing and retain much of their structure in the gut increase satiety and help weight control and can favourably influence lipid and glucose levels,” said Mann.

In 2018, an Irish study found a high fibre diet may help reduce stress and anxiety.

It was very difficult to have high levels of fibre on a low-carbohydrate diet unless you took fibre supplements, said Mann. And “there isn’t the huge body of evidence that we’re talking about” for supplements being beneficial, he said, adding that “it’s pretty well impossible” to get enough fibre from fruit and vegetables alone.

John Cummings, emeritus professor of experimental gastroenterology at the University of Dundee, one of the authors, said the study was of huge importance and the conclusions should not be thought of as “just a fad”.

“This is the end of 50 years of researching dietary fibre. It is a defining moment,” he said. The research brings together population epidemiological studies and feeding studies and, he said, “we now know that fibre does things in the body which give us a credible explanation for how this works. We need to get this written in stone and part of people’s lives.”

The review found only limited evidence that diets with a low glycaemic index and low glycaemic load protected people against stroke and type 2 diabetes. Glycaemic load is a measure of how much a food will raise blood glucose levels after eating it. Low GI foods may also contain added sugars, saturated fats, and sodium, say the scientists, which makes the link less clear.

In a comment piece in the Lancet, Prof Gary Frost from Imperial College London said the analysis “provides compelling evidence that dietary fibre and whole grain are major determinants of numerous health outcomes and should form part of public health policy”.

Other scientists backed the findings and said the public should eat more fibre. “It is a concern that the fibre consumption in the UK is on average, currently much less than [30G A DAY]. It is also worrying that otherwise healthy consumers who try to follow popular diets low in carbohydrate will find it very difficult to achieve a healthy level of fibre intake,” said Dr Ian Johnson, emeritus fellow at the Quadram Institute Bioscience.

Prof Nita Forouhi of Cambridge University’s MRC epidemiology unit said the findings “do imply that, though increasingly popular in the community at large, any dietary regimes that recommend very low-carbohydrate diets should consider the opportunity cost of missing out on fibre from whole grains”.

When it came to carbohydrates, she said, “the quality matters very much, over and above the debate on quantity. Wholegrain foods are typically high in fibre, and this research provides further evidence to highlight their importance and support a shift in our diets from processed and refined foods in the food supply chain towards more fibre-rich wholegrain foods.” – Guardian