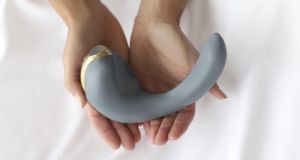 The developers of a female-focused sex toy are alleging gender bias after the organisers of the International Consumer Electronics Show revoked an innovation award honouring its inventor and banned the product from its annual showcase.

Lora Haddock, founder and chief executive of Lora DiCarlo, said her team had been overjoyed when the company’s Osé personal massager was selected as the CES 2019 Innovation Awards honouree in the robotics and drone category.

It’s the company’s first product, a hands-free device developed by an almost entirely female team of engineers using “new micro-robotic technology that mimics all of the sensations of a human mouth, tongue, and fingers, for an experience that feels just like a real partner”, Haddock wrote in an open letter on the company’s website. “My team rejoiced and celebrated,” she wrote. “A month later our excitement and preparations were cut short.”

The Consumer Technology Association, the organisation behind the annual Las Vegas-based trade show, told the company that entries “deemed by CTA in their sole discretion to be immoral, obscene, indecent, profane or not in keeping with CTA’s image will be disqualified”. In a statement, CTA officials said the product “should not have been accepted for the Innovation Awards Program” because it “does not fit into any of our existing product categories”. “CTA has communicated this position to Lora DiCarlo,” the statement reads. “We have apologized to the company for our mistake.”

Haddock called this “an even more insulting and frankly ridiculous assertion”. She noted that her team of engineers designed the Ose in partnership with Oregon State University, whose robotics lab is ranked as one of the best in the United States.

“Ose is the subject of eight pending patents and counting for robotics, biomimicry, and engineering feats,” she wrote. “Ose clearly fits the Robotics and Drone category – and CTA’s own expert judges agree.”

CTA’s statement does not explain why Lora DiCarlo can no longer showcase its product at CES, and officials did not immediately respond to follow-up questions. But Techcrunch noted that OhMiBod, a Kegel exerciser, won the digital health and fitness product category in 2016.

Haddock said it was important to call CTA out because “these biases smother innovation by blocking access to funding, exposure, and consumers that could take brands and products to the next level”. “You never know how technology can be used, the future of healthcare might well be in the patent for a sex toy,” she wrote. “But if CES and CTA are so intent on keeping women and sex tech out, we’ll never find out.” – Guardian