Why is no one producing Irish lentils?

Lentils are a great meat substitute. Here is how to make a lentil pasty 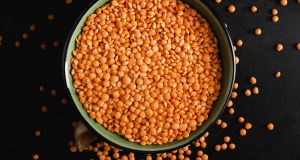 Despite the push on food provenance over the past number of years, grains and legumes seem to have mostly missed this aspect of the food revolution. Of course, there are notable examples. Dunany Farm in Co Louth produces rye and spelt and Hodmedod’s in Suffolk in the UK produces organic lentils.

However, if you were to pick up a package of each in the supermarket, it would most likely only tell you where it was packed. This is unfortunate. Most of us wouldn’t buy beef, fish or even vegetables without knowing where they were from. Why is this? And more to the point, why is no one producing Irish lentils?

Lentils are not only a great meat substitute but a wonderful ingredient of themselves. Almost 20 years ago, I worked in a famous vegetarian restaurant in Edinburgh called Henderson’s. It was the first vegetarian restaurant to open in Scotland, in 1962. We used to make a version of a Cornish pasty with red or yellow lentils. It sold like hot cakes. Thankfully, their bakers would make the puff pastry and we only had to make the filling as it was a busy restaurant doing hundreds of covers a day.

How to make a lentil pasty

Fry a diced onion with two crushed cloves of garlic in 25g of butter and a little oil. Add a teaspoon of garam masala and fry until the onion is translucent. Add 200g of yellow lentils and cover with 450ml of water or vegetable stock. Simmer until the lentils are soft. Season with salt and add a few chopped fresh herbs. Remove from the heat and cool.

Roll out some puff pastry and stuff the chilled lentil mix into the pastry. I make it like a calzone, cutting a circle of pastry, adding the filling and then folding it over itself. To seal, brush the edges with a little water and crimp or curl them with your fingers. Brush the top with egg yolk and bake for 25 minutes, until golden brown. Serve with some herbed sheep’s yoghurt.