Spirits writer Dave Broom presents The Amber Light, a film about the drink and its cultural significance 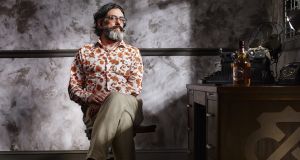 “Treat it with respect. Don’t drink too much of it.” Glaswegian Dave Broom on whisky 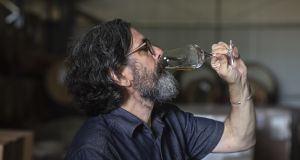 To the Shelbourne hotel on a chilly November evening for the launch of a new film about Scotch whisky. No harm to that splendid institution, but Dublin’s grandest hotel – tonight also hosting a TCD Law Society ball – is the sort of place you’d expect to sip the finest malts. Heavy drapes. Middle-aged men in three-piece suits. All that sort of thing.

Adam Park, director of The Amber Light, and Dave Broom, Glaswegian whisky (and whiskey) expert, are relaxed about the drink’s tweedy history. But they are also evangelical about its place in the modern world. The film moves from country estate to remote distillery to hip Edinburgh bar.

The filmmakers have issued a Spotify playlist – folk song melding with King Creosote – to accompany the theatrical release. In its closing stages, it even admits that one can add mixers to high-end single malts. Surely not?

“Whisky is a great drink. But it’s just a drink,” Broom, an agreeable man with pepper-and-salt beard, tells me. “Treat it with respect. Don’t drink too much of it. Some drams are better to have on their own. But there are great single malts that you can mix. The great cult drink now is Lagavulin and Coke.”

Hang on a moment? They’re adding Coca Cola to a famous, spicy Islay malt, and one of the nation’s whisky boffins is all right with this?

If you can stand no further shocks then look away from Adam Parks’s supplementary remarks. This is like something from an awful dystopian novel.

All joking aside, Broom and Park clearly have the right attitude. No culture stands still. If Scotch whisky roots itself in tradition alone then it will ossify into the exclusive preserve of club-room bores.

The Amber Light is as open to the distinguished history of the drink as it is to the iconoclastic distillers and experimental bartenders who are pushing the product forwards. The great novelist Alasdair Gray is there to explain how the drink messes with his creative juices. Ian Rankin, king of Edinburgh noir, ponders how notions of Scottishness have changed over the past 50 years.

Dave retires to the fields and, like the ancients, drinks a rudimentary brew out of seashells. Intriguingly for domestic viewers, he muses upon the influence of the Beaton family, a clan of doctors who may have originated from Ireland, on the early history of Scotch. Is he suggesting we invented the stuff?

“I think there’s strong evidence that that is the case,” Broom says. “It’s a fascinating area. If you look at the north of Ireland and across to Islay, that’s the cradle of distillation. I hate to break it to you, but the first record I found is in Chaucer’s Canterbury Tales.”

“We’ll keep that between us,” he says. “The story about the Beatons is important though. They were an important medical family. We discovered some fascinating stuff.”

The business has moved in dizzying directions over the succeeding centuries. There is now a huge high-end market for single malt in the United States and Asia. Hip brands play cheeky games with their names and their labels. Newspapers cover the auction of rare whiskies as they once covered the auction of Renaissance masterpieces. A few weeks ago, a bottle of 1926 Macallan sold for £1.5 million (you read that right).

“The world of whiskey has fundamentally changed,” Broom says. “I used to resent the fact that I couldn’t afford these whiskeys. But, you know, some people can afford a bespoke suit and that’s fine. They can afford a better hi-fi. That’s the nature of the beast. Given that this is where Scotch whisky has ended up, Irish whiskey should be at the same point. It’s a marker. It’s a stake in the ground. But it’s important that quality goes all the way down the line. It’s also important that the stuff we’re paying €50 for is even better than it was 20 years back. That’s where the real challenge is.”

To accompany the release of The Amber Light, Broom and the team are launching their own feisty whisky.  He describes the 23-year-old tipple from Ben Nevis distillery as “an old traditional style of west-coast Scotch. Filthy in a nice way.”

The language alone sums up his eclectic, generous approach to the drink he loves. He may even allow you to drink it with Coke.

The Amber Light is on limited release from November 22nd. There is a screening followed by a whisky tasting at Rathmines Onmiplex on November 29th.