What’s really in your potato waffles? 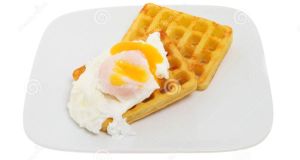 Nothing beats real mashed potato as a warming winter carb, but there is still a lot to be said for potato waffles as the ultimate tasty convenience food. Perhaps the best-known brand is Birds Eye, which introduced the product in the early 1980s, and a jingle to go along with it. Is it sacrilege to imply they might not be the best in the supermarket? To a casual observer, it’s hard to tell one brand from another.

So what can we tell from the packaging?

First of all, Birds Eye scores with marketing speak. The packets even include the lyrics to its jingle, which lauds them as “waffly versatile”. It also notes they are gluten-free, vegan and have “no artificial colours, flavours or preservatives”. So what is in them?

The ingredients are listed as: potato (87 per cent), rapeseed oil, potato granules, potato starch, salt, stabiliser (E464) and white pepper. A note on the packet gives a nod to those looking towards following a plant-based diet and explains that “E464 is derived from a natural plant material. We use it to control the level of fat absorbed by the waffles and to maintain their shape and texture.”

Of course, trees are plants too, as is cotton. E464, also known as hydroxy propyl methyl cellulose, can be derived from wood pulp or the cotton plant. It is growing increasingly popular as a replacement for animal-derived gelatin as more consumers seek out vegan goods. It is quite soluble, but too much can cause intestinal issues, such as bloating, diarrhoea or constipation.

Rapeseed oil is now seen as a better option than sunflower for cooking at high temperatures, as would be done in a factory, so Birds Eye gains an advantage there.

The surprise is that it uses potato granules and starch as well as the real thing. Manufacturers of ingredients say they give a more concentrated taste than using potatoes alone. It’s not all bad, though, as granules can be made from potatoes deemed too small to be useful for crisps or other products.

The main difference is the rice flour and added sugar in the form of dextrose – perhaps that enhances the flavour. Four of these waffles have 2g of sugar, while four from Birds Eye have just 1.6g. It all counts, though not all of that will be from added sugar, as potatoes have their own natural sugar.

There are similar ingredients in Tesco’s waffles, which have potato (86 per cent), sunflower oil, dried potato, potato starch, salt, dextrose, stabilisers (disodium diphosphate, hydroxyl propyl methyl cellulose), white pepper and turmeric. The new ingredient is disodium diphosphate, which is common in processed foods. Too much phosphorous in the diet is not a good idea, but then no one eats waffles every day, do they? Four of these have even more sugar at 2.4g. Turmeric adds a nice yellow colour.

SuperValu’s own-brand waffles boast that they are made with “real mashed potatoes” though, to be fair, so are the others. The difference here is in the quantity. They comprise: potatoes (92 per cent), sunflower oil (4 per cent), potato flakes, salt, dextrose, hydroxyl propyl methyl cellulose and pepper extract. For a processed food, they are not bad.

Waffles also win on packaging. Most have no plastic and a symbol to say “recyclable”, which simply means the package can be recycled. Just don’t think this means they can go into the paper bin, as the cardboard will have been contaminated by the frozen food inside.

The cheapest waffles are from Lidl and Tesco, which cost 99 cents for a box of 12. This works out at €1.46 per kilogram. Tesco’s are made in Belgium by a British company, though, so it’s hard to know how politics will affect the price in future.

Birds Eye waffles cost from €2.95 to €3.80 per kilogram, depending on what size packet you buy. Getting more generally costs less. Supervalu’s ones cost €1.84 per kilogram.

Many of these products have a green light on the front to indicate they are low in saturated fat and sugars. They are highly processed, however. Waffles will never be as nutritious as a few boiled potatoes, but they can evoke a taste of times past.