My Daily Diet: Lauren Kinsella (36) is a vocalist, composer and lecturer 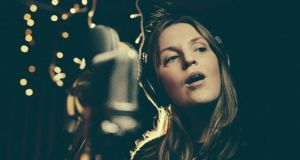 Lauren Kinsella: ‘I’ll have a cup of decaf Barry’s tea, the first of many’

8am Yesterday I got up and did an hour of yoga but my mornings change all the time. If lecturing in Leeds I could be up at 6am to get the train or if performing the night before I’ll sleep in. If singing that evening I’ll steam my voice which helps to rehydrate the vocal cords.

10am I’ll wait a bit before I eat some porridge with chestnut honey, almond milk, cinnamon and roasted red grapes. I love natural yogurt but I find a non-dairy coconut alternative just as good, too much dairy is not great for the voice . I tend to eat the same thing each morning but it’s a little more challenging if I’m on tour when it’s likely then to be a croissant or eggs. I’ll make some tasty filter decaf coffee; I stopped caffeine a few years back as I came to realise it just didn’t agree with me. Another favourite is Flahavan’s soaked oats with chopped banana, date syrup and nuts. I could eat this at any time of the day.

11am I’ll have a cup of decaf Barry’s tea, the first of many, and catch up on admin like grant applications and emails. Or I could have a rehearsal and I also lecture a couple of days a week in Leeds. I need time to prepare and practise at home whether it’s working on new material, making lecture notes, or rehearsing new music. Luckily my neighbours don’t mind me singing or playing the piano.

2pm Something simple like rye toast with banana and peanut butter. I eat a plant-based diet at home but if out I am more flexible. After a recording session yesterday I had a toasted sourdough pastrami and emmental sandwich for lunch. I have a structure but it’s a loose one. In the autumn I’m performing in Ireland at the Galway Jazz Festival and at the Hugh Lane and when back I like nothing better than to go for a few pints of Guinness after gigs with friends. I love playing in Ireland as the audiences are so warm and expressive.

6pm If I have a performance that evening I will be at home preparing and will have a simple dinner of dahl and rice or rice noodles and tofu - either I have this kind of food made up in the fridge already or I whip it up quickly. I like eating this way, and have done so for many, many years. I’ve never been fully vegan but would veer towards it at home.

12am If performing at night I’ll probably be in a social mode and so would stay for a glass of wine after. I have a weakness for Ombar dark chocolate bars so I might have one after the gig, or, when I’m home, some rice cakes with peanut butter and date syrup. I’ll do some meditation if I can. I’m a good sleeper normally but it can take a while after a gig as adrenaline will have been in full swing. Being a musician, your life is fairly unpredictable and the constants I try to depend on are my yoga practise and sleep. I love to go for long walks in nature too. For a singer, having rest from speaking is key- which can be tricky to get. Even though it sounds so, I’m not particularly balanced all the time, I have no on/off button and events can easily conspire to bring out my hedonistic streak and break up my routine. But I will always be striving to get back to the ideal way of living that works for me.

Calcium
Roasting grapes is a healthy way to sweeten porridge. There is no evidence that dairy milk leads to mucus but if Lauren chooses to avoid it, that’s fine, as long as she has enough calcium from other sources such as tofu, chickpeas, green leafy veg and sardines. I would recommend a fortified almond milk that will provide vitamin D which helps absorb calcium.

Avoid fake foods
Evidence suggests eating a plant-based diet can help lower cholesterol and blood pressure and also has benefits in terms of reducing greenhouse gases. I like that Lauren sticks to natural whole foods like beans, vegetables, whole grains etc as opposed to processed plant foods like plant based sausages which can be high in sodium and preservatives.

The trained GP who can’t work in Ireland, despite the shortage
7