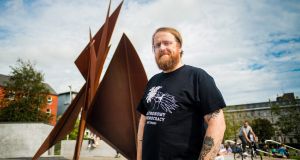 Food On The Edge founder and director JP McMahon

Stars of the Netflix TV series Chef’s Table are among the culinary luminaries who will attend the Food On The Edge symposium in Galway on October 21st and 22nd. Influential Brazilian chef Alex Atala of D.O.M. in São Paulo, and New Zealander Ben Shewry of Attica in Melbourne, headline a diverse panel of international speakers who will take part in the fifth running of this annual event taking place at the NUIG campus in the city.

The theme for the conference this year is Migration, and the organisers say it will look at “how food travels and how that affects people’s perception of food”. Irish Times columnist JP McMahon, founder and symposium director of Food On The Edge said: “There has been a natural evolution within Food On The Edge over the years which reflects the changes in food culture on a global level, We have seen a progression away from simply talking about food to recognising the power of food as a tool for social change.”

The line-up of participants also includes Leonor Espinosa, the Colombian chef who was voted best female chef in Latin America in 2017, and Daniel Giusti, former head chef at Noma in Copenhagen, whose Brigaid project is working to improve the food in public schools in the US.

The Irish participants include Darina and Rachel Allen of Ballymaloe Cookery School, and Patrick Powell, head chef at Allegra, a restaurant and bar at The Stratford development in east London from the team behind Chiltern Firehouse. Allan Jenkins, editor of Observer Food Monthly, will also be taking part.

Fáilte Ireland is supporting the venture as part of its Taste the Island project, a 12-week initiative promoting Ireland’s food and drink offering. Sinead Hennessy, food tourism officer, said: “Fáilte Ireland research tells us that tourists are not always aware of our high-quality produce and the sustainability credentials around our food and drink before visiting. We are aiming to address this lack of awareness and highlight Ireland’s seasonal ingredients, adventurous tastes and bold experiences.”

The 2019 programme was launched on Monday at Dublin restaurant Fade Street Social. Tickets are now on sale, with two-day passes costing €400 and one-day tickets at €225. See foodontheedge.ie.

Lofty ideals: the dos and don’ts of converting your attic
8

‘When you’re beautiful, other women absolutely despise you’
10