What is really in your Slimfast products? 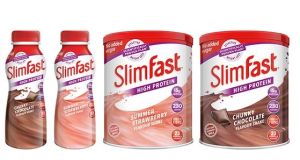 There are two words that dieters love: slim and fast. That’s fast as in quick, rather than starving or reckless. To lose weight swiftly is what many people want, especially during wedding season, party season, the new year . . . any time really.

So calling a product Slimfast when it was introduced in 1977 in the United States, was clever. It sounds even more on trend now that fasting is the new dieting with time-restricted eating, which is also known as intermittent fasting, winning over new adherents.

But Slimfast isn’t a fast, it is a range of snacks, drinks and meal-replacement products designed to help consumers follow a low-calorie diet. It works on the basis that you have three snacks and two meal replacements, such as a milk shake, each day in addition to one low-calorie dinner of real food. A lot of Slimfast products have to be bought to do this properly.

So what can you learn from the label on a Slimfast Summer Strawberry Flavour shake?

The first thing you notice are the words, “Effective weight loss . . . scientifically proven plan weight*”. That appears to say that Slimfast has proof gathered by scientists that its products work. If it does, it’s not sharing the evidence here.

The explanation accompanying the * reads: “Substituting two daily meals of an energy-restricted diet with meal replacements contributes to weight loss.” So having two low-calorie meal substitutes each day in place of two standard meals can help you to lose weight. Thank you Slimfast for pointing out that taking in few calories can help with weight loss. There are no studies or trials mentioned on the packaging or the website specific to the use of Slimfast. If they exist, they are hidden well.

It also says on the front “no added sugar”, which is correct because it has sucralose. There’s no need to add sugar if using sucralose, a sweetener manufactured by controlled chlorination of sucrose, which is about 500 times sweeter than sugar, according to the Food Safety Authority of Ireland.

The next upfront claim is “source of fibre”. Hah, that will be the strawberries, you might think. But no, this is a “strawberry flavour” powder. There are no strawberries. The lovely pinky colour comes from colouring: beetroot red. Any fruity flavour will come from the “natural flavouring”. (There is no chocolate in the chocolate flavour shake either.)

The fibre comes from inulin and probably some from powdered cellulose, which is used as an emulsifier too. Inulin is a newish darling of the ingredients industry, which is keen to help us to add more fibre to our diets given that most of us do not get enough. It is often derived from chicory root, which is part of the dandelion family. Some people react by getting bloating, as they might after eating beans. As it is increasingly being added to food, it is worth check the labels.

There are plenty of other unappealing ingredients such as soya bean oil, sodium carboxy methyl cellulose and soya lecithin. It also has a roll call of 19 added vitamins and minerals from vitamin A to zinc. But why not just make a milkshake with real strawberries and take a good quality multivitamin with it? That way you can skip the additives.

The Slimfast brand has been owned by Irish giant Glanbia since last year, adding to its stable of “performance nutrition” offerings as it positions itself as a global nutrition group with operations in 32 countries. It says it leads the field in sports nutrition, cheese, dairy ingredients, speciality non-dairy ingredients and vitamin and mineral premixes. So there is an opportunity for it to improve its Slimfast products.

Adding Slimfast was a clever move for the company that owns Avonmore and has a strong dairy focus. For consumers, perhaps buying shares in Glanbia would be a wiser choice than buying their Slimfast diet products.