Do you know what's really in your tub of ready-made guacamole?

Reading labels: Homemade guacamole is a delight, but take great care if buying the readymade brands 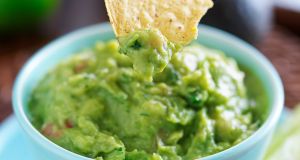 Guacamole: The freshly-made version of this Mexican avocado dip tastes like summer on a tortilla chip. It’s light and tangy. Yet, thanks to the avocados, it’s creamy too, though it has no dairy ingredients. Photograph: iStock

There should be a law against making food products that taste so unlike the original they turn people off it. There are far more important things to worry about in the world, but it’s irritating because it feeds into the idea that healthy food isn’t tasty. Take the flavourless excuse for salad served at McDonald’s. Or guacamole.

The freshly-made version of this Mexican avocado dip tastes like summer on a tortilla chip. It’s light and tangy. Yet, thanks to the avocados, it’s creamy too, though it has no dairy ingredients.

Well, it doesn’t in the original and best form of the dip as served in Mexico. The “avocado sauce”, for that is what the name means, has avocado, cilantro (aka coriander), onion, jalapeño pepper, lime, salt and tomato. That’s it. No cream, milk, wheat, additives or preservatives are needed. Really, it should be mostly avocado.

That’s not what you find in a squeezy bottle of Old El Paso Chunky Guacamole. The dominant ingredient is water, probably to help mix up some of the many powders listed such as modified corn starch, potato flakes, wheat flour, dried glucose syrup and garlic powder. This dip is just 14 per cent avocado – even though there is a picture of the creamy fruit on the front.

This really should be called a “guacamole-style” dip, as a large part of its texture comes from the cream cheese, cream, whey extract, whey powder and caseinate, all of which come from milk.

Read the label on Old El Paso, which is produced in the UK for American giant General Mills, and it feels as if someone is shouting the word “sulphites” at you. It is listed in bold five times as it is to be found in the potato flakes, garlic purée, lime juice concentrate, modified corn starch and even the sugar. What an overload. It all makes for an unappetising concoction that bears little resemblance to the real thing.

Most versions of guacamole found in the chilled section of supermarkets make a better stab at providing a decent dip, though they seem to love adding dairy.

One that doesn’t, and is the better for it, is Dunnes Stores brand organic guacamole. This contains Hass avocado (95.5 per cent), onion, lime juice, salt, coriander and garlic powder, all of which are organic. There is also salt, ascorbic acid and xanthan gum. It is a good green colour, though there is no added colouring.

There is however, a chunky red line on the nutrition label highlighting the fat content. It shows that each 100g has 19g of fat. Anything over 17.5g is considered to be high in fat. So it’s high in fat because it is made of mostly avocado, which has high levels of monounsaturated and polyunsaturated fat, which are considered good. The line listing saturated fat is orange as it has medium levels of that fat, which is the one to worry about.

There are plenty of calories too. One 170g pot has about 320kcal. Hilariously, the packaging says there are 17 servings in it and that a serving is 10g. It was produced and packed in Belgium for Dunnes so perhaps they have smaller appetites there.

Lidl’s Meadow Fresh Chunky Guacamole seems more suited to Irish appetites. A “serving” of this is listed as a quarter of a 190g tub or about 47g. Look at the front of the packet and you will see this dip has medium levels of fat and saturated fat. Check out the ingredients to see why. There is less avocado and more unfatty fillers such as water and starch, though there are more other vegetables too. The list of ingredients gives an insight into how this dip was made. First on the list is “42 per cent avocado (avocado, water, acidity regulatory, citric acid, salt, ascorbic acid)”. This means the first ingredient is a mixture of avocado and preservatives. The second ingredient is “29 per cent avocado pulp (avocado, ascorbic acid, xanthan gum and citric acid)”. What is the difference? Why are they listed separately? Well, because they arrived in separate packages at the factory – not as whole fruit. How unappetising, especially given that there are more additives and preservatives listed again at the end of the ingredients.

Another unappetising offering is the Mexican-style guacamole from SuperValu. It is imported by Horgan’s Delicatessen in Cork from Zorba Delicacies, which is based in Wales and made its name selling hummus. Again, the first ingredient on the list is “avocado 69 per cent, (avocado, water, ascorbic acid, citric acid, salt, xanthan gum)”. Then there is a long list of ingredients, including a selection box of different types of preservatives, antioxidants, acidity regulators and firming agents.

If Dunnes Stores can offer a dip that tastes something like the real thing, without so many additives, that means it is possible.