‘There is a huge drive for plant-based eating,’ says the the model turned food writer 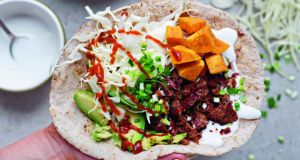 “Food is something that should be enjoyed, and I like to concentrate on making the recipes delicious rather than shoving opinions down people’s throats. I also hate the idea of pressurising or shaming someone to eat a certain way.”

Roz Purcell, the former model turned food writer, hike organiser and TV presenter, has written her third cookbook, and it is entirely plant-based. Its title, No Fuss Vegan, sits well with the down-to-earth Tipperary woman’s approach to food, and life in general.

“I don’t like to label myself. I like cooking and eating vegan, but if I want to have some chocolate I will, or if I go to someone’s house and they’re after making me something that’s not fully vegan, I’m probably still going to eat it and not feel bad about it.”

Apart from an occasional egg from the hens at her family home, it is two years since Purcell last ate animal-derived protein. “I was in Istanbul and at the time still eating meat, but I was finding myself not enjoying it anymore and leaving it to one side of my plate, and that’s a big deal, I never leave food on my plate.” It was a gradual change, she says. “I didn’t have a moment when I thought, ‘I’m going to stop’.”

Purcell is far from alone in her move to a plant-based diet. Vegan dishes were the most-searched for recipe on Google in Ireland in 2019, and she is not surprised by that. “My community on social media have been asking for a vegan book for the past two years, and more and more people just want vegan recipes on the blog. Wherever you look on social media or TV, there is a huge drive for plant-based eating, driven by ethical, environmental and many other good reasons.”

There are 100 new recipes in No Fuss Vegan, and Purcell has been working on them over a period of three years. “I set a target of making two new recipes a week over the course of a year. I test and re-test my recipes six or seven times. Let’s just say everyone in my house was well fed.”

New converts to veganism may be delighted to learn that the book includes replica suggestions for many dairy ingredients, including cream cheese, mascarpone, ricotta, and béchamel sauce. “Béchamel was the first thing I ever learned how to cook and I remember six or so years ago making an alternative, through a lot of trial and error. But I got there, and you would not be able to tell the difference. When I first made it at home I didn’t tell anyone it wasn’t the real thing and no one noticed.”

Purcell has invented a vegan version of black pudding, at the request of her father, but the recipe she is most proud of from the book is for sausage rolls. “The filling is just like the sausage rolls we used to get when we were growing up, but made of chickpeas, nuts and spices – who would have thought!”

There are also quite a few recipes for sweet treats and desserts. “My death row meal would be a series of cakes, cookies and crumbles. I grew up baking with my grandmother, so not only are they my favourite thing to eat, but also to bake. The one I make most often is the shortbread. They take no time at all so when you get a bit peckish late at night you can whip up a batch.”

But after one of her big walks with her Hike Life Community, which she says will have events in Ireland and the UK every three or four weeks this year, there is one dish that Purcell really looks forward to. “I’m usually ravenous after a hike so I eat my most satisfying, comforting and quickest dish – mushroom and black bean chilli.”

These are delicious either hot or cold. They have so much flavour and are like little savoury crumpets. I love bringing them with me for a breakfast on the go.

1 To make the salsa, put all the ingredients in a bowl and stir gently to combine. Set aside to allow the flavours to marry together while you make the fritters.

2 Put the chickpea flour, curry powder, paprika, turmeric and salt in a small bowl and stir to combine, then whisk in the almond milk to create a smooth batter.

3 Put the sweetcorn, courgette, carrot and spring onions in a separate large bowl and stir to combine. Add the batter to the veggies and mix well. Heat the oil in a frying pan over a high heat. Add about 2 tablespoons of the fritter mix to the pan, pressing it down with the back of the spoon to spread it out a little. Cook for 3 to 4 minutes on each side, until the edges are golden and crisp and the fritters are cooked through. You may need to lower the heat a little as you cook the fritters in batches so that you don’t burn the last few.

4 Serve with spoonfuls of tomato salsa on top.

This vegan mince started off as a total mistake. I was recipe testing and thought I had created a dud. It was sitting in the fridge for a few days because I hate food waste, so I was determined to use it for something. I woke up one morning, starving, after a few days in London with no food prep done. I decided to crumble up the mix and fry it along with some spinach as a burrito filling – and it was great! Not to blow my own trumpet, but it’s been the perfect replacement for that ‘mincey’ taste.

1 First, steam the sweet potato for the filling. An easy way to steam sweet potatoes is to add them to a small microwave-safe bowl with a little water (pour in enough water to cover the potatoes by 5cm to 7.5cm). Cover the bowl with a plate and microwave on full power for 4 to 5 minutes, until tender when pierced with the tip of a knife. Drain off any excess water and set aside while you make the mince.

2 Heat 1 tablespoon of the oil in a frying pan over a high heat. When the oil is sizzling, add the onion and fry for 30 seconds, stirring to ensure it doesn’t burn. Add the garlic and spices and cook for 1 minute. Remove the pan from the heat and leave to one side for a moment.

3 Put the kidney beans in a blender and blitz for 20 seconds. They should be mostly broken down with some beans still visible. Scrape the beans into a medium-sized bowl. Stir in the rest of the ingredients, including the onion mix, and combine well. You can make the “mince” up to this point and store it in an air-tight container in the fridge for up to six days or use it straight away.

4 Heat the remaining tablespoon of oil in a frying pan over a high heat. Break up the “mince” into crumbs using your fingers, then add to the pan and cook for 3 minutes, stirring constantly.

5 To assemble the burritos, lay out the wraps and add some shredded cabbage, followed by some sweet potato, avocado and “mince”, then drizzle with a little coconut yogurt and sriracha (if using).Wrap up tightly, cut in half on the diagonal and enjoy now or later.

This nearly didn’t make it into the book – not because I questioned the recipe, but because I totally forgot I’d even made it! Just in time, my friend Sarah said, “I hope that chilli is in the book, cause you still haven’t even put it up on the blog!” It’s rich in flavour, so easy to make and perfect for prepping ahead. I hope you love it just as much as Sarah does.

1 Wipe the mushrooms clean, then remove and discard the stems. Put the mushroom caps and carrots in a food processor and blitz for a few seconds to dice into small pieces.

2 Heat the oil in a large saucepan over a medium-high heat. Toss in the garlic and chilli and cook for 1 minute. Add the mushrooms, carrots, herbs and spices and cook for 5 to 6 minutes, stirring occasionally, until the mushrooms and carrots are completely tender.

3 Add the beans, tomatoes and cacao powder. Bring to the boil, then reduce the heat to a gentle simmer and cook for 6 minutes more.

4 To serve, ladle into bowls along with some boiled basmati rice, then top with diced avocado and chilli flakes.