Paul Flynn: Here is a trio of delicious options for the many soup lovers in Ireland 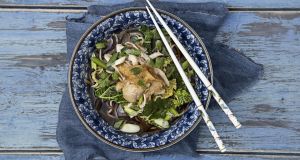 I rarely eat soup. I don’t know why really. If I’m out, it’s perhaps that I think there’s always something more exciting on a menu and I don’t want to miss out. Soups seem somewhat unadventurous and I like to think of myself as Captain Exciting. I’m out of step, of course, as the soup market is huge in Ireland and continues to grow.

A tenuous diversion, if you’ll indulge me. One of the reasons I love Ireland is our penchant for giving people nicknames. My friend Crocker (remember Kojak?) is a repository for this and he drops juicy monikers without even noticing. His profession as a postman conveniently exposes him to every nickname in the area.

There was a fella playing for a local GAA club years ago who was christened Soup by his team-mates as he was deemed to be a thick country vegetable. I laughed quite a lot at that one, the poor fella.

God knows what they called me; I was only ever begrudgingly picked for a team in school. My lack of athletic prowess always relegated me to walking around the pitch with the other unwanted anoraks. I was okay with it though – all that exertion and smelly changing rooms didn’t float my melon boat. I was nerdy and content listening to Joni Mitchell in my bedroom, dreaming up future adventures.

But lots of you do love soup, so I have three very different versions here. Two are broths and the other is a puree. The chicken soup is packed with noodles and would certainly be a meal in itself. The sweetcorn and coconut soup is a creamy delight. Tinned sweetcorn is one of life’s easy pleasures and when blended well, it’s like sipping silky ambrosia. The ginger and coconut give it a lift and transport us to a balmier climate.

Slow cooking is second nature to me. I love how with very little effort and just a little patience, a lumpen piece of meat can be transformed into something melting and utterly delicious. Lamb shanks are a favourite of mine in this regard. When paired with a broth mix (a blend of barley, split peas and lentils, available in most supermarkets) it becomes something hugely satisfying on a cold winter’s night.

2 Drizzle the chicken legs with the oil, season them and then cook for 40 minutes until really crisp. I used the crispy skin in my recipe but you can discard it if you don’t fancy using it.

3 Put the sesame oil in a saucepan and add the onion, garlic, ginger and chilli.

4 Cook for five minutes or so over a low heat.

5 Add the stock, soy, honey and fish sauce to the saucepan and bring to a simmer.

6 Add the cabbage and cook it for three minutes, then add the noodles.

7 Take the chicken off the bone and chop it into chunks and add it to the broth, followed by the spring onions.

8 Check the seasoning of the dish, then ladle evenly into warm bowls.

Method
1 Melt the butter in a pot and add the onion, garlic and ginger.

2 Cook over a low heat for five or six minutes, until the onion starts to soften. Then add the curry powder and cook for two more minutes.

3 Chop the coriander stalks and leaves roughly, but only add the stalks to the onions at this point.

4 Add the sweetcorn and the stock to the pot and bring to a simmer and cook for 10 minutes.

5 Add the coconut milk and season.

6 Mix the chilli oil with the coriander leaves and the peanuts.

7 Ladle the soup into warm bowls then spoon the peanut chilli oil on top.

2 Season the lamb shanks, then heat the oil in a pot until it is gently smoking.

3 Colour the shanks in the oil until the meat is dark and crisp.

4 Lift the shanks from the pot, then carefully throw away the oil.

5 Wipe the pot with some kitchen towel and put it back on the hob over a gentle heat.

6 Add the butter, onion, garlic and bacon lardons to the pot then cook for 10-15 minutes till soft and golden.

7 Add the tomato puree, cook it out for a minute or two, then add the broth mix, followed by the cider and chicken stock. Bring to a simmer.

8 Return the lamb to the pot and add the cinnamon and oregano.

9 Cover and cook in the oven for 90 minutes, making sure the lamb is falling off the bone when finished cooking.

10 When cooked, remove the lamb, allow it to cool a little, then chop it into small chunks.

11 Pop it back in the broth. Add the parsley, season and serve.

12 I love this with a little hot Dijon mustard stirred into my bowl at the last minute.