Paul Flynn: My take on coddle, given a Waterford twist

These dishes are all simple, encouraging you to do whatever catches your fancy 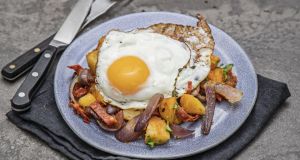 I had a profound encounter in the woods a few days ago while I was walking my little dog. I was distracted. As always, thoughts swirled round my addled brain. Eventually the woods enveloped me. Beech trees, russet and golden arched over the river, like walking through a postcard.

Colligan was one of my father’s favourite places. We’d go for a spin on his half-day when the chemist shop would close. He would smoke his pipe, absorbing the trees and the sound of the river. I would throw sticks into the water and time them as they eased their way under the bridge to the other side.

On my walk, I met a woman. We stopped and chatted. It was Clodagh Beresford Hayes, a celebrated poet and a hero of mine. I told her of my love of words and how my father would often recite Shakespeare and Latin proverbs at the table at teatime, inspired by the monks in Mount Melleray in the 1930s. It was seared onto his beautiful mind, but his words thumped off my brutish young brain like missiles.

Words are Beresford Hayes’s stock and trade. “Crepuscular,” she tossed to me, like a comforting bone. Something mythical that appears only in twilight. Contextually she recited one of her own poems, under those trees beside that stream. I was rooted.

Her poem was called Ruminant. My eyes moistened; I hoped she didn’t see.  The poem was apt. That morning was memorable. Tea time is still special to me, particularly in winter, hungry after the day. With the fire lighting, the house embraces you. There’s nowhere better to be.

These dishes are all simple, to encourage you to do whatever catches your fancy. Eggs, smoked fish and cheese, what’s not to like? You can substitute the mackerel for smoked salmon if you’re not a fan. This hash uses chorizo, by now you’ll know I’m a devotee. It makes the world a better place.

Coddle is divisive. More than anything, I think it’s the colour, so I’ve browned everything and added some bits and pieces to snatch it from Dublin and bring it to Waterford.

2 Add the oil into a large wide oveproof pan and heat till gently smoking, then brown the sausages, bacon and pudding in batches.

3 Remove from the pan, tip away any excess oil and carefully give it a wipe with kitchen towel, put back on the heat, then add the butter, onions, potatoes and thyme.

4 Cook over a medium heat for 10 minutes until everything softens, then add the flour.

5 Cook out the flour for two minutes, add the stock, soy and thyme, then bring to a simmer.

6 Put the sausages, bacon and pudding back in the pan making sure everything is submerged in the stock, then bake uncovered for 20 minutes in the oven.

7 Check that the potatoes are cooked, season and serve.

2 Whisk the eggs with the milk, salt and pepper.

3 Melt the butter over a medium heat in a non-stick pan until it starts to foam then add the eggs.

4 Turn the eggs around the pan for a minute or so, scraping the bottom all the while. A spatula is best for this.

5 Scatter the mackerel over the top of the eggs, followed by the cheese, then put the pan in the oven for 12 minutes until the omelette is golden and puffy.

6 Remove from the oven, allow to cool a little then gently prize it out of the pan using the same rubber spatula. Scatter the spring onions over the top.

7 If you have difficulty getting the omelette out, simply serve it in the pan.

Method
1 Peel, cube and parboil the potatoes till they are almost cooked.

2 Drain and allow to steam dry.

3 In a large frying pan or wok, heat the olive oil until gently smoking then add the potatoes.

4 Cook over a medium heat till they start to turn golden, then add the garlic and onions.

5 Continue to cook for a further 10 minutes or so, then add the chorizo.

6 Allow the hash to soften and come together while you fry the eggs.

7 Season the hash, add the parsley then divide onto warm plates.

8 Season the eggs, place them on top of the hash and then serve.