‘Intriguing’, but does it taste nice? John Wilson tries a €650 wine 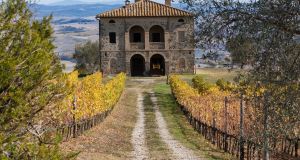 Every wine region or country has a great name, an historic estate that produces the most expensive, collectible and sought-after wines of all. Think of Domaine de la Romanée Conti in Burgundy, Lafite, Latour and Mouton-Rothschild in Bordeaux, Vega Sicilia in Spain, and perhaps Grange in Australia.

In Italy the most revered name is Biondi Santi. Wine lovers speak of it in hushed tones, and talk in awe about the iconic Riserva - produced only 39 times since 1888. The wines can live for a century or more. This legendary estate in Brunello di Montalcino, nestled among the beautiful Tuscan hills, can claim to have invented both the wine and the region that bears its name.

The first mention of a wine called Brunello was in 1869 when Clemente Santi won a silver medal at an Italian agricultural show. Although there were other producers in the region, most had given up by the early 20th century. Only Biondi Santi, run by six generations of the family, has produced the wine continuously since the mid-19th century.

Greppo, the Biondi Santi estate has a cellar with wines going back to the late 19th century. In 1944 Franco Biondi Santi and his father hid the wines behind a false wall to prevent soldiers from either side in the war drinking or stealing their precious collection. More recently a group of wine journalists was invited to a tasting of the wines going back to the 19th century. All came away shaking their heads at the quality and longevity of the wine.

In the late 20th century, a big, rich, powerful style of Brunello di Montalcino became hugely popular in the US. Some critics rounded on Biondi Santi, but the estate stayed true to its original restrained and elegant style, which has, more recently, come back into fashion.

Biondi Santi has always been traditional and meticulous in their methods. The estate-grown grapes all come from their own clones of Sangiovese, the great Tuscan variety. Their top wine, the Brunello di Montalcino Riserva is produced only in the finest vintages. The wine is aged in large casks for three years and for a further few years in bottle before release. The idea is that this, and their other wines, should be ready to drink on release, although they will last for decades.

The latest release, the 2012 Riserva is the last vintage produced by the legendary Franco Biondi Santi who died in 2013. Over his 40-year tenure, he was responsible for raising the profile of his estate and the entire region to international fame. More recently the family sold the estate to the French company EPI, owned by the Descours family, who also own Charles Heidsieck Champagne. They have ensured the same care and attention is given to every aspect of production.

Biondi Santi produce three wines, all 100 per cent Sangiovese. I had the opportunity to taste the most recently releases. The Rosso di Montalcino 2017 is scented and fresh with elegant red cherry and strawberry fruits, balanced by a god acidity and light tannins. Drink now or keep five years.

The Brunello di Montalcino 2011 has aromas of violets and roses, intense but elegant fresh pomegranate and red cherry fruits, set off perfectly by a refreshing acidity and taut drying tannins on the finish. Keep for a decade or more.

The Brunello di Montalcino Riserva 2012 gently releases aromas of roses, leather red cherry fruits; the palate is refined and linear, with seductive cherries and plum fruits, a slight earthiness, and some notes of tobacco and leather. It is all held together by a huge structure of very fine tannins. An intriguing wonderful wine, with great finesse that will last decades.