The veggie barbecue – you won’t even miss the meat 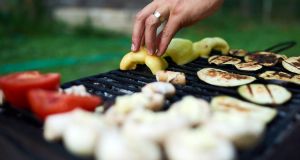 If you do crave an umami fix, then remove the stem from whole flat or portobello mushrooms and grill them.

For the good of our health, we all know it’s wise to cut back on our consumption of meat. And yet, as soon as the sun shines and barbecue season starts, the ritual slew of meaty barbecue recipes fill the media: the ribs; the wings; the chops; the burgers; the breasts; the sausages.

The pity of this is not simply that it’s predictable. The pity lies in the fact its fully 15 years now since an Irish chef – the brilliant Denis Cotter of Cork’s iconic Café Paradiso restaurant – showed us all that barbecue actually works superbly when you scrap the meat, and give the god of the Grill an offering of vegetables instead.

Cotter’s eureka moment came when he was asked to cook a series of dishes for a barbecue festival in Bantry, west Cork.

“Sounded like hell to me at first . . . “, he wrote in the book Paradiso Seasons, “What surprised me, and sparked my ongoing and growing interest in outdoor cooking, was that some of the food tasted better than it did when cooked on a domestic indoor stove.”

I was at that barbecue festival all those years ago, and Cotter’s dishes went down like snow cones in the desert: to this day I don’t think I have ever seen a crowd of people scarf food so hungrily.

And nobody wondered, even for a moment, where the meat had gone.

Start with some staples, parboiling a bunch of vegetables, and making a tray of polenta. Then you are ready to go. One of my favourite things to grill is squashed potatoes, a signature dish of the Argentinian chef, Francis Mallmann. You parboil potatoes and then, when they are still warm, put them in a tea towel and flatten them with the palm of your hand. The potato holds together, and gives you two nice flattened surfaces to grill. Brush with oil, cook them slowly, turning frequently, until the skin is crunchy crisp, then top with tapenade or pesto.

Barbecued vegetables love labneh, which is the simplest thing to make: empty a tub of yogurt into an unused j-cloth, sprinkle in some salt, then tie it up and let the whey drip into a bowl for several hours. The creamy tartness of the labneh partners perfectly with everything: grilled flat mushrooms; barbecued sweetcorn; grilled squash.

If you do crave an umami fix, then remove the stem from whole flat or portobello mushrooms and grill them. Put some garlic butter to melt into the cup side, then pack the garlicky mushroom into a grilled bread roll with lettuce leaves and a smear of Dijon mustard: close your eyes and you will believe it’s a steak sandwich.

You won’t even think to ask where the meat has gone.