The giant avocados are coming ...

Super-sized versions of the brunch favourite, the size of a human head, go on sale on Saturday 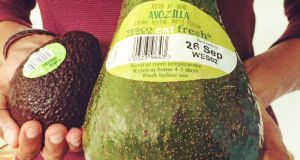 Avozillas go on sale in Ireland on Saturday

Giant avocados, at least five times the size of normal versions of the millennials’ brunch favourite, are going on sale in Ireland on Saturday. The super-sized fruit, which can grow to about the size of a human head, will go on sale at 70 branches of Tesco.

Stores will have a limited supply of the unusual fruit, which is a cross between two types of avocado, the West Indian and Guatemalan varieties. The good news is ... you won’t need a mortgage to buy one. They will be on sale, while stocks last, for €4 each.

The ‘Avozillas’, which are cultivated naturally and are not genetically modified, were originally grown on just four trees in Limpopo in South Africa, but farmers in Queensland in Australia are now growing them commercially too. The largest specimen harvested in Australia weighed in at a whopping 1.8kg.

The notoriously tricky fruit – rock hard one moment and bruised and brown the next – carries a label saying it will ripen if stored out of the fridge, in four to five days. Let’s hope so, because if not, you’d be a long time waiting for one of these bruisers to ripen for your family-sized bowl of guacamole or avo toastfor 10.

Tesco’s director of fresh food, John Brennan, confirmed that the ‘Avozillas’ arriving in Ireland are from the original four trees, and were grown in South Africa by one of the world’s biggest suppliers of avocados.

Health Hints for the Home: Worms in children
7