The Christmas cake and Christmas pudding that always work

With Stir Up Sunday approaching, now is the time to get your seasonal festive bake on 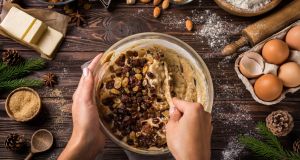 Stir Up Sunday, this weekend, is the traditional day for making plum pudding for Christmas.

Have you got your Christmas cake and your pudding baked and packed away, save for the regular annointing with whiskey or brandy? If not, Stir Up Sunday, which traditionally falls on the last Sunday before Advent, takes place this weekend. It’s the perfect excuse to play festive tunes, warm up some mulled wine and get those Christmas baking aromas filling the house.

The pudding should be your priority, so that it has time to plump up and mature before the big day, so get everyone in the house to take their turn with the stirring, and make a wish as they do so.

Caterer and baking expert Eunice Power relies on family recipes that have been handed down through generations for her puddings and cakes. Her pudding is a rich and indulgent one and she is such a purist she even makes her own mixed peel, and it’s surprisingly easy to do.

“This recipe was given to me by my auntie Joan. The recipe had been handed down by her mother before her, and her mother before that. This recipe makes three 1.2 litre puddings, and for me this is the perfect size, anything larger takes so much longer to cook. We usually use two over Christmas and keep one for later in the year. I have been using the Blackrock Irish Stout from Dungarvan Brewing Company for the past few years, with great results.”

It’s not too late to make a traditional Christmas cake too, and we’ve heard nothing but praise for this fail-safe recipe from Power. “This is our family’s Christmas cake recipe. I have used this recipe more than 100 times with 100 per cent success. I have also made this cake using gluten-free flour and it has turned out perfectly,” she says.

If you are not a fan of the almond and royal icing components of the traditional Christmas cake, you might prefer Lilly Higgins’s Dundee cake, which has a layer of whole almonds on top instead. Her recipe can also be made now and allowed to mature between now and Christmas.

Method
1 Soak the sultanas, raisins, currants and cherries in the brandy and stout overnight; give them a good stir now and then.

2 The next day or so, mix all the ingredients together until well combined. Divide the mixture between the two bowls and pack it in. Cover with the greaseproof paper, folded, with a pleat in the centre, as the puddings will expand slightly as they cook, then pop the lids on.

3 Christmas puddings are quite dense because of all the fruit and nuts they contain. Place the puddings in deep roasting tins. Pour boiling water into the tin – the water should come almost half way up the pudding bowl – and cook for three and a half hours in the oven at 100 degrees/gas mark ¼, or in a steamer on top of the cooker. Top up with boiling water as required.

4 When the cooking time is up, allow to cool and store in a cool dry place. When you want to eat the puddings, steam them for a further one and a half to two hours. Turn them out and flame with brandy. Each pudding should serve at least six.

I find good quality mixed peel hard to come by so I have been making my own. The fresh, citrusy flavours give a lightness and freshness to cakes, mincemeat and puddings.

For years I made mixed peel using traditional methods, then I found a tiny little newspaper clipping in my late grandmother’s cookbook called Peel for Cooking. This is the simplest recipe ever.

Method
1 Cut the fruit in half and juice them (keep the juice to make the citrus cordial recipe overleaf). Using a dessert spoon, remove the membrane from the fruit. Finely dice the peel and pack it into a large jar.

2 I use a one-litre Kilner jar. Pour golden syrup over the peel, until the jar is full. Leave for two weeks, at which stage the peel will have absorbed much of the syrup and released some lovely citrus flavours into it. After a few weeks, drain it well and it is delicious in cakes, puddings and mincemeat.

3 Don’t throw away the drained syrup, you can re-use it to make more peel, and it is also delicious on ice-cream.

Method
1 Soak the fruit in the brandy over night in a bowl covered with a clean tea towel. Stir it occasionally if you are sleepwalking. Line a 23cm round or square tin with two layers of greaseproof paper, extending the paper above the top of the tin. The next day, mix the grated chocolate, spice, nuts and lemon rind into the soaked fruit.

2 Cream the butter and sugar until it is light and fluffy. Break in an egg and beat the mixture until it thickens, mix in a little flour, and continue in this way until all the eggs and flour have been added. Stir in the prepared fruit. Lastly, add the bread soda dissolved in the buttermilk and mix thoroughly.

3 Put the mixture into the prepared tin, and smooth the surface, leaving a slight hollow in the centre. Bake in a preheated oven at 140 degrees/gas mark 1 for the first 20 minutes, and at 130 degrees/gas mark ½ for the next three hours. Resist the temptation to open the oven door for the first three hours. Check after three hours to see if the cake is cooked. I do this by inserting a metal skewer. If the cake is ready, the skewer will come out clean; if not, leave it in the oven for a further 30 minutes, or until you are satisfied that it is baked.

4 Allow the cake to cool in the tin for 30 minutes, then turn it out on to a wire rack to cool fully. The following day, wrap the cake in greaseproof paper and put it away. I usually turn it upside down and put a heavy book on top to flatten the surface – this makes it easier to ice. Store for at least two to three weeks.

450g ground almonds
450g of caster sugar
A drop of almond essence
1 tbsp brandy
2 eggs, beaten with a fork
1 tbsp apricot jam to brush on the top of the cake

Method
1 Brush the cake with some heated apricot jam. Mix the almonds and caster sugar together and add the other ingredients until a smooth paste is formed. Turn on to a sugared board, knead well and roll out on a board dusted with icing sugar. Roll it out large enough to cover the entire cake. Gently ease it around the cake and smooth it all over with the palms of your hands. Leave for two days before covering with royal icing.

Method
1 Place the egg whites in a spotlessly clean bowl. Whisk them for about two minutes until they are starting to foam. Add the icing sugar, a little at a time. Because of its powdery nature, if you add it all together it will fly all over you and your counter top.

2 Continue adding the icing sugar until the mixture is stiff and stands in soft peaks, suitable for coating a cake. Now whisk in the glycerine. If you want to pipe the icing, add a little more icing sugar as the icing should be slightly stiffer.

Method
1 Line a 10in round baking tin with baking parchment. Preheat the oven to 150 degrees.

2 Place the raisins and sultanas in a colander and rinse well with hot water to remove any oils. Drain well and place in a large bowl and cover with two tablespoons of whiskey and the marmalade. Stir well to combine, and cover.

3 Rinse the cherries in a sieve to remove the sticky syrup. Dry the cherries on kitchen paper, then tumble them in flour. Set aside.

4 Cream the butter and sugar in a large wide bowl until light. Add the eggs one at a time and beat until well incorporated. Sieve the flour, baking powder and mixed spice into a bowl. Gradually add to the egg mix along with the remaining two tablespoons of whiskey and the ground almonds.

5 Fold the dried fruit and cherries into the cake batter. Spoon the batter into the prepared tin, smoothing the top with the back of a tablespoon. Leave a slight dip in the centre so it rises evenly.

6 Next is the fun part. Arrange four almonds in the centre of the cake, then make four lines of almonds coming from each one to the side of the tin. Use this as a guide for arranging the remaining nuts on top of the cake. Bake for three hours until set and the cake is golden. Cover with paper over the top if the nuts darken too much. Leave to cool completely before cutting. It often tastes better after a few days, so let those flavours develop.

6 Wrap the cake well and store in an airtight tin. It keeps really well, up to three months if you continue to douse it with a little whiskey or brandy.