Cooking with Conor Pope: Suddenly, it is done. One pot, not much washing up and it tastes amazing 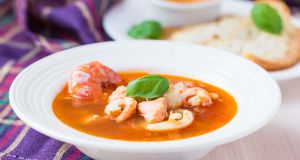 Each week during November, former Celebrity MasterChef finalist Conor Pope will be undertaking a culinary challenge for Food Month at The Irish Times. In part three, he makes bouillabaisse.

The last time I went in search of a naggin of Pernod I was 16 and looking for Dutch courage ahead of a Mod disco in the Sacre Coeur hotel in Salthill.

Now, more than three decades on, here I am scanning the shelves of my local off-licence looking for the aniseed drink, trying hard not to recall what happened when I downed a pint glass of the stuff mixed with blackcurrant Miwadi before dancing like a whirling dervish to A Town Called Malice.

Let’s just say it tasted only slightly more disgusting on the way up as it did on the way down.

When I’m thinking about what to cook, the single greatest consideration is how many pots I will have to use

I find what I am looking for nestled between the Sea Dog rum - another favourite of my misspent youth, incidentally - and some class of artisan gin that did not exist when I were a lad, and bring it to the till full of suspicion and dread.

Oftentimes, when I’m thinking about what to cook for dinner, the single greatest consideration is not what I would like to eat or what I can actually cook or even what ingredients are in my house, but how many pots I will have to use.

The lower the number, the more likely I am to want to cook it. I know this approach to cooking lacks finesse, but I don’t care. I love it when all that is required of me is to chuck all the ingredients into a casserole dish, ideally at the same time, before throwing the casserole dish into the oven where heat works its magic for a few hours.

In a perfect world, of course, my family would then spoon feed themselves directly out of the pot, but for reasons best known to themselves, they draw the line at such communal eating and plates or bowls or generally required.

Like so many dishes regarded as posh in the 21st century, it started out as a pauper’s dish and has Greek rather than French roots

Having spent week one of this challenge using every implement in my kitchen over six or seven hours in order to eat lobster ravioli, and the second week wasting precious hours of my life making fish stock and then nearly killing myself with an outsized pan on a gas hob in order to make paella, I thought I would treat myself to a single pot dish. So, bouillabaisse it is.

Once I learned how to spell the word, I quickly fell down an internet rabbit hole. While searching for a recipe, I learned all manner of interesting things, to me at any rate, about the quintessential French fish stew.

I found out that, like so many dishes regarded as posh in the 21st century, it started out as a pauper’s dish and has Greek rather than French roots. Greek fishermen founded the port city of Marseille 2,700 years ago and used to feed themselves on a fish soup made with sea water and scraps of fish they had been unable to sell at market.

Fast forward 2,500 years and it was suddenly de rigeur at all the fanciest of Parisian restaurants and even featured in Le Grand Dictionnaire de la Cuisine, written by Alexandre Dumas no less, and published in 1873.

I also learned that the name comes from the French words bouillir - to boil and baisser which means to lower the heat quickly.

Fast forward even further to the 1980s when the good burghers of Marseille decided their dish needed a charter which laid out the necessary ingredients which included scorpion fish, moray, weever fish and pastis.

A local fish shop does not sell scorpion fish - they had not even heard of it - or moray or weever, and my local off licience does not sell pastis, so I buy monkfish, prawns, cod and mussels and a small bottle of Pernod and I am good to go. Or so I think.

There are so many sites offering alternative versions with a whole host of random cheats and short cuts that I am quickly bamboozled. Eventually I decide on the BBC Good Food folk.

Then comes my favourite bit, the bit when I get to throw everything into the pot

First I make croutons - dead easy - a baguette sliced thinly and sprinkled with salt and olive oil and baked for 15 minutes.

Then there is the “herb bundle”. I am useless of wrapping presents, so it comes as no surprise to me that I am even more useless at making a layer of leek skin (not the professional term) neatly contain sprigs of thyme, bay, parsley stalks, orange peel and chilli. But I do my best.

Then comes my favourite bit, the bit when I get to throw everything into the pot. In goes the oil, onion, leeks and fennel which are followed by garlic and my useless herb bundle, a splodge f tomato purée, star anise and the still disgusting smelling Pernod. Then there are chopped tomatoes and saffron. Once everything is bubbling away, I add fish stock left over from the paella incident and - weirdly I think - a potato.

When the potato is on “the brink of collapse” I scoop it out for the rouille. To make that, I crush garlic, chilli and saffron and the cooked potato in a pestle and mortar before whisking in egg yolk and olive oil and then lemon juice. I am supposed to do all that delicately, but I just whoosh it all around and it seems grand. It is ridiculously simple and tastes lovely. I think I show great resolve not eating all the rouille as I wait for everything else to come together.

I am given two options by the Beeb. I can leave the soup chunky and just add the fish - that is the rustic option - or I can opt for a more refined bouillabaisse by blitzing the soup, pouring it through cheese cloth and then adding the fish. I am starving and lazy, so I go all-rustic on the soup.

Suddenly, it is done. One pot, not much washing up and it tastes amazing. I appreciate that I am in serious breach of the bouillabaisse charter but that is something I am going to have to live with and let’s face it they will never hear about my many breaches. I hope.