Table for one: The rise of the solo diner in Irish restaurants

Dining alone is a growing trend, a true test of hospitality and the list of wines by the glass 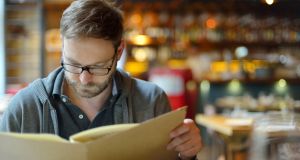 Young man choosing from the menu in the restaurant.

The idea used to horrify us, but now more of us are doing it. We’re dining alone, and not just half-perched on a stool necking a ham roll on our break. We’re sitting down to tables with place settings for one, in the certainty that no one is going to sneak a chip or half our dessert. The table for one is a growing trend, a true test of hospitality and the list of wines by the glass.

Solo diners, Greta Garbos who want to be alone with their food, are influencing the design and layout of restaurants and menus. If the call comes from a UK number, Irish restaurants will snap to attention just in case it’s a Michelin inspector, but otherwise it’s all part of the service. And unlike most restaurant trends, the solo diner is expected to stick around, and grow even bigger.

As a restaurant critic you need a dining companion to take the bare look off you. In a country this small you stick out enough, even with cover. Two people can give a menu a better run through, the experience of the typical meal.

Lone diners are more likely to arrive without a booking, so we are probably still not capturing the full picture.

A table for two is still the default setting in many restaurants, but shared tables, bar seating and the increasing busyness of lives means we are having many more individualised restaurant experiences.

The restaurant collector, who likes to tick off well-known restaurants, knows that walking in as a solo diner can help to swing a seat more easily in an impossible-to-book place.

Technology has played its part in the growth of solo dining, providing companion-free diners with an endless tasting menu of distraction. Most of us are never more than a thumb-swipe away from a book, article, podcast or box set to keep us entertained as we eat.

But technology has also captured the data on the trend. About four years ago, online booking service OpenTable started noticing an increase in bookings for tables for one. The service recorded an 80 per cent increase in solo reservations in New York in the past year, although we don’t know what the 80 per cent increase represented in real numbers. Lone diners are more likely to arrive without a booking, so we are probably still not capturing the full picture.

Restaurateur Elaine Murphy says they see a lot of solo diners in three of her Dublin restaurants – the Winding Stair, Legal Eagle and The Woollen Mills.

“We don’t bat an eyelid at a solo diner. Quite a few of them are women. At nighttime they tend to be overseas visitors, during the day plenty of Irish residents. We’ve never discriminated, told them they have to be at the bar, or put them at an out-of-the-way table.”

Solo diners are a big feature of lunch in the Legal Eagle beside the Four Courts, which is part of the reason it offers good wines by the glass. “If you don’t have a decent selection by the glass, the solo diner is stuck with the house,” Murphy says.

Likewise, sharing plates can be offered as half-portions. “I think it’s really the mark of your hospitable genes. You can make a memory for somebody if they have a good experience dining alone.”

Murphy believes the younger generation of Irish diners are “more confident in restaurants”, having grown up with a scene. Recently she had three lone diners in. She offered one of them a newspaper, the other was on their phone, and the third person said they “just wanted to sit and let their brain rest and look around”.

Being alone more generally is a growing feature of life, despite our infinite ways to connect. In Ireland, 23.5 per cent of us – or almost 400,000 households – live in one-person homes, according to the 2016 census, a growth of 2 per cent since the last census in 2011.

Arranging a night out with friends is more challenging as we work longer hours. A 2016 study by Morgan McKinley, cited by Bord Bia in its food trends forecasting, found that nearly three-quarters of Irish workers reported working longer hours than they were contracted to. Nearly half of people were working six or more hours over their contracted time every week.

Maitre d’ John Healy has seen a rapid change in how people behave in restaurants when they’re on their own. “In the Four Seasons we used to have magazines and newspapers. Now everyone’s on their phone, or with an open laptop on the table, or Face-timing with earphones.”

In Suesey Street on Dublin’s Fitzwilliam Place, where he runs front of house, the proportion of lone diners is low however, around 1 per cent he reckons. “People probably chose a bigger restaurant where you can hide,” he says.

Do restaurant hearts sink at a lone diner, because they represent half the spend of a table for two? “It’s half the revenue, but you’re able to turn the table faster,” Healy says. “Lone diners come in early, and they’re gone within an hour.”

Healy makes an effort to make people feel comfortable when they arrive alone. An older woman came in recently. “She was very independent. She came in slowly, and was waiting to see how we would engage with her.” When she began talking to Healy, he found her fascinating.

In the past, dining alone could be a particular challenge for women. Healy had a friend who travelled for work and ate on her own in restaurants. “She was hit on the whole time.” She developed a range of tactics, opening her diary, reading a book, “sending out the signals so people don’t assume you’re looking for attention”.

In the Cork town of Midleton, chef Kevin Aherne has a regular trio of lone diners who come in to his restaurant Sage every week. One of them brings a Kindle to read. “If you’re creating an environment where it’s friendly and the feeling is generally a relaxing place then people feel comfortable.”

Does he like the trend? “Any diner is a welcome addition to the restaurant,” he says. Staff tend to have longer conversations with solo diners. “It can be great for getting feedback on the food.”

Most of his lone diners eat in the casual restaurant, but corporate solo diners, who are travelling for work, come to the more formal restaurant.

Elaine Murphy likes to go “to the weirdest places where no-one would know me” and dine alone. It allows her to people watch, and listen in a way she can’t do at work. “Women have these intense conversations, and men don’t seem to chat at all.”

Etto, Merrion Row, Dublin 2. There are a small number of bar seats here and the food is great.

Fish Shop, Benburb Street, Dublin 7. Again bar and wall seating and terrific food are the key to this place.

Cornucopia, Exchequer Street, Dublin 2. A window seat with a bowl of soup and a book. Vegetarian heaven.

The Fumbally, Clanbrassil Street, Dublin 8. Pick your spot at the long shared table or curl up on a battered couch with one of the cookbooks.

The Woollen Mills on Ormond Quay, or The Legal Eagle on Chancery Place, Dublin 1. Staff know how to make lone diners feel welcome.

Sage, Midleton, Co Cork. Pick casual or formal. There will be other lone diners here.

Suesey Street, Fitzwilliam Place, Dublin 2. They have seats at the bar and a casual menu for a fast lone bite.

Kai on the Sea Road, and Tartare on Dominick Street, Galway. Both will take a lone dining food experience up several notches. “I love them,” chef patron at Kai Jess Murphy says, especially of older people travelling and dining alone.

How to cater for lone diners

Restaurants who want to attract the solo diner could arrange for bar or long table seating to make people feel more comfortable. In the Journal of Business Research last year, a study found that placing solo dining tables together with small distances between them led to more camaraderie between lone diners.

A recent survey by Jurys Inn in the UK found that 73 per cent of people said they would enjoy a meal out on their own, and one in four people said they had eaten out alone in the last month. Lunch was the most popular solo dining occasion, breakfast was the next most popular followed by brunch. Dinner was the least popular with 57 per cent of people saying they would feel comfortable eating out during the evening alone.

Props seemed to be important with books, magazines or newspaper the most popular, followed by “people-watching” and going on social media as the third most popular thing to do while dining alone.