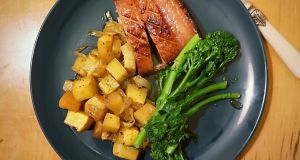 I know ham and pineapple on a pizza can be divisive, but in a roast, I can’t see what’s not to like. The zingy pineapple cuts through the fatty meat and paired here with turnip and onion, they make brilliant bedfellows for a bit of roast bacon.

But this dish was not a pre-planned pineapple pairing, it was just a happy coincidence of having all the ingredients to use up at the same time and craving a warming roast mid-week. It has become a recipe I’ve repeated many times because anything that tastes this good with such little effort deserves plenty of airtime.

I used Peter Hannan’s sugar-pit cured bacon, available from his shop in Moira. Most savvy butchers and indeed many of the supermarkets, do a cured bacon, gammon or ham joint that is similar. You’re looking for something that just goes straight into the oven and cooks in under an hour.

Everything goes into one dish, and it takes very little attention once the chopping is done. It’s one of those dishes you start eating the second it appears from the oven. But if you do end up with leftovers, it tastes great the next day, chopped up, fried quickly and devoured as a hash or in a taco.

What you’ll need and how to cook it

Preheat your oven to 200 degrees Celsius. Peel your onion, turnip and pineapple. Then cut them all into chunky cubes of similar size (discarding the core of the pineapple). Put them all in a roasting dish. Sprinkle on the oregano and a drizzle of olive oil and season with salt and pepper. Mix all together and then spread out, so the bacon can sit on top. Score the skin on the top of your bacon piece and place it on top of the vegetables.

This goes into your hot oven for 10-15 minutes, to colour and crisp the skin. Then you’ll need to take it out for a minute and cover it, very carefully, with kitchen foil. This will stop the skin burning.

Put it back in the oven, bring the temperature down to 180 degrees Celsius and cook for another 40 minutes.

Remove from the oven and leave to rest for 10 minutes. To serve, take the bacon joint out of the dish and onto a board and carve into chunky slices. Serve with a big scoop of the pineapple, onion and turnip.

– Ali Dunworth is a food writer