The vegan steak has arrived, but what does it taste like? 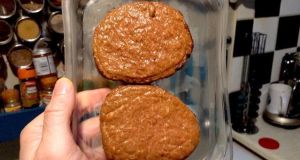 Tesco Veggie Steak: “It does not taste bad but nor does it taste good”

If a vegan steak that promises to be “barely distinguishable from the real thing” when it comes to taste, texture and smell sounds too good to be true, it is.

Tesco has staked a claim to be the first retailer to bring a 100 per cent plant-based fillet steak look-alike to the Irish market. But meat lovers who try its new veggie steak will almost certainly be disappointed and find themselves asking “Where’s the beef?”

Perhaps if you have never tasted a steak or have not eaten one in a couple of decades, you might be fooled into thinking this product is just like the real thing, but anyone with even the most passing acquaintance with a juicy sirloin will instantly be able to tell the difference.

When it is divested of its plastic coating, the veggie steak, made with wheat and soy protein, does look a little steaky, albeit slightly sweatier and slimier than you might expect.

And it does smell a little like meat when introduced to a frying pan, but again it would be difficult to confuse the two.

It does manage to have a meat-like texture – right down to the vague redness you might find in a hunk of flesh cooked medium – thanks to the addition of natural red colouring to the mix. But the meat product it most resembles is not a steak but a burger, with the flaky pieces of non-meat hard to miss when it is sliced open.

It has a dense and chewy texture and a slightly salty flavour that is unremarkable and forgettable. It does not taste bad but nor does it taste good, and any meat lover who sits down to a plate of this with chips will almost certainly find themselves leaving the table sad and unsatisfied.

Of course, Tesco is not really trying to capture the hearts of the hardcore carnivore and it is hoping its new “steak” – manufactured by Dutch firm Vivera – will allow it tap into the growing vegan market in Ireland, although if that is the plan, the wisdom of stocking it alongside conventional fresh meat products is questionable.

The new veggie steak is the latest and perhaps most significant encroachment of substitute meat products on to the Irish market. But in the US, where the market is more developed, the threat is considered so great that American beef manufacturers recently filed a petition to exclude non-animal products from the definition of meat.

Shifting away from red-meat consumption is seen as desirable among many health advocates because of its links to coronary heart disease, stroke and type 2 diabetes. Beef is also frowned upon by many environmentalists due to the heavy demands it places on farm land and its voracious appetite for freshwater resources, as well as the role cattle play in global warming.

But any such shift would be bad news for Ireland, the fourth-biggest beef exporter in the world. In fact, beef is the single biggest component of the State’s €12 billion food and drink export business.