Review Meal Box: Up your game with venison wellington from Juniors 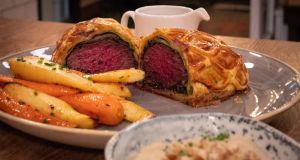 Juniors’ wild Wicklow venison wellington comes pre-cooked and rested, which is the way you should have it.

I lived in Lincoln many years ago, a historic cathedral city that dominates a dramatic hill in the midlands of England. At the time, Jeffrey Archer was doing a spell in the local prison for lying and cheating in a 1987 libel case and was released on remand to direct a play in the beautiful theatre there.

Among the other attractions was a restaurant called Browns Pie Shop. Just about everything can be improved with pastry and one of my favourites was their game bird pie.

While I haven’t seen any lockdown pies, a quick scroll through Instagram revealed that there is a plethora of wellington, mostly beef, the posher city cousin of pies. Wellington is, according to Fiachra Kenny the head chef at Juniors, this second lockdown’s sourdough.

He makes a venison wellington, which ticks two tasty boxes – game and pastry. The origins of this great dish – which you will find in top restaurants across the globe – are most likely in the French filet de boeuf en croûte but the English name commemorates the first Duke of Wellington’s victory at the Battle of Waterloo. We Irish may perhaps prefer to stick with the original.

It’s an intricate dish that requires precise cooking. The pastry should be crisp and golden and the meat inside should be glistening, a medium-rare pink. There should be no “soggy bottom”. To prevent intimacy between the meat juices and the pastry, a protective layer is put in place. Some recipes wrap the fillet of meat and mushroom duxelles in a pancake, others use thin slices of prosciutto. Kenny uses a nice chunky green leaf of cabbage. “Probably Savoy,” I think as I crunch through it. And it works very well.

Juniors’ wild Wicklow venison wellington comes pre-cooked and rested, which is the way you should have it, although I find mine, which is still warm after I’ve brought it home, needs a little bit of reheating. Popping it into a relatively cool oven for under 10 minutes does the trick.

The wellington looks stunning. There is a golden hue to the crisp, glazed pastry which has intricate lattice work, and following Gordon Ramsay’s online top tip, I slice it generously: the slices, he advises, should be at least an inch thick. The visual impact is not quite what I’d expected. Rather than one loin, there are two thinner strips, so it falls apart a little as it is cut. It is on the more cooked end of medium (possibly the reheating) but it is beautifully tender and the venison has a good gamey flavour without being in anyway overpowering. The mushroom duxelles add a nice punch of flavour.

There are plenty of sides. The puree of celeriac and chestnuts is nutty, there is a touch of sweetness – I almost detect vanilla – and the walnuts on top add a contrasting crunch. Baby carrots and parsnips have a bit of a bite, they’ve been honey roasted and tossed in chives and the potatoes, which have been sliced thinly, cooked and compressed, have been cut into rectangles to be reheated. A sticky, concentrated gravy adds richness to the dish.

This is a beautiful dinner. There isn’t a scrap of work to be done, and the portions are very generous, so I don’t even mind that there’s no starter or dessert. I only notice afterwards that there is a meal deal for two – €10 more gets you a snack, a starter and a dessert, which sounds like great value, even though strangely, it’s just one of each. How did I miss that?

A main course dinner for two is €50

Verdict: Rich autumn flavours that are ready to serve

Difficulty factor: A night off, get out the fancy plates and light a few candles

The supper club menu changes weekly and has in the past featured beef wellington for two. Pick and mix on snacks, starters, main course and desserts from the online menu, which includes Balscadden lobster tortellini, €14 for one and côte de bœuf for two, €60. Finish with the pistachio financier with fresh raspberries, €6.

A bit of Paradiso at home, what could be more inviting? Cork’s renowned vegetarian restaurant offers a menu of finish-at-home meal kits, mostly for two people, which include starters such as grilled cauliflower and cashew korma, €18, and hazelnut gougères with smoky peperonata, €16, and main courses such as aubergine parcels of kale and Knockalara sheep’s cheese,€30, and desserts.