Review: Indian restaurant with no frills, loads of thrills

Three Leaves in Blackrock: close your eyes and you’re in a much swankier restaurant for a steal 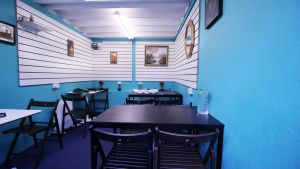 It’s not so much a Thursday night as a scene from a Benjamin Black novel. Bare trees and bundled people loom out of the fog as we make our way to the seaside for dinner. The chef has been thinking about the weather, we’re told. It must be hard not to when your kitchen is in a market where an iron chill seeps up from the ground and settles into your bones.

The tiny dining room in Three Leaves in Blackrock Market in south Dublin will be changing by the time you read this. They’re planning to knock through a wall and open into the kitchen next door, where the cooking is happening. They’re also going to soften the lighting. Tonight it’s two fluorescent tubes overhead, which bring all the warmth of the mortuary to proceedings. There are painted chipboard walls and industrial navy carpet underfoot. Chairs are folding black wooden numbers. You want frills? You came to the wrong Indian.

But none of this matters, because every time the front-of-house woman, Millie, opens the rickety door she brings heat. Yes, also a breeze that ribbons your legs like a malevolent polar cat, but Millie radiates warmth and explains how chef Santosh Thomas (everyone calls him Thomas) has put special thought into the khoya chicken because “everything is designed to warm you up”.

Three Leaves is a start-up Indian restaurant that’s grown from a street-food stall in the incubator space that is Blackrock Market. We tried to eat here a few days earlier but they had sold everything on the menu apart from the palak pakora chaat – fried spinach with three sauces. We scooped up a takeaway tray of the €6 dish, and Millie’s card to make a booking. Now the middle child and I are back for more.

We’re not the only happy eaters. Everyone is lavishing praise. “I cook potato and aubergine all the time, but I can’t get them to taste like that,” one woman tells Thomas as he tours the dining room (a trip of maybe eight steps) in his warm jumper.

The gujarati spud and aubergine dish comes on the side of the vegetarian dahl – “the simplest dahl”, Millie explains, just red lentils and vegetables. It’s a lentil dahl for the soul, thick and rib-sticking as an Aran jumper put through a boil wash. The potato and aubergine chunks have been coated in a paste of tomato, ginger and garlic and finished with mustard seeds, and are the kind of food that would inspire you to reach a bit further with the same ingredients in your own kitchen.

We start with my favourite dish of the night, served on a slate – but that’s okay because no cutlery action is required. There’s a birds nest tangle of onion coated in paneer, or the house-made cheese made by heating milk, adding lemon juice and draining the whey. The creamy onions are coated in batter and served with sauces, a sunny yellow mango,  dots of spicy tomato and a mint sauce the colour of new spring leaves with the kick of a herd of mules. There’s bhelpuri, a mix that tastes “kind of like crisps with spicy sauce,” according to the 11-year-old, before he wonders why it’s sizzling. It’s a cold dish but the puffed rice is making the noise (snap, crackle and pop) as it mixes with the mango and tamarind chutney. There are sesame sticks and crunchy dried lentils here, too. It’s Bombay Mix with a sticky, crunchy kick.

The khoya chicken is made with chunks of thigh meat smothered in a thick milk solids sauce, made by heating milk slowly until it thickens into a creamy finish. Flecks of ground clove bring the heat (like a hot whiskey in food form) and there’s cinnamon and cardamom in here, too, to soften its bite. Millie urges us to smell the rice, which is a clever way to get more from a dish. Putting your nose into the plate and taking a good sniff will turn up the volume on everything that comes afterwards.

There are thin triangles of bread with just enough potato in it to remind you of Irish potato bread, finished with fenugreek leaves and butter. It’s as good as bread I’ve eaten in Michelin-starred Indian Gymkhana.

We finish with a glistening gobstopper-sized gulab jamun, a doughnut made from milk powder and fried in ghee for a buttery finish. It comes in a lava hot syrup, looks innocent but is hotter than a hob of hell.

“Mum, we need to come here again,” the middle child says. He’s right. Three Leaves is a place that is only going to get better. Bring an expensive bottle of wine (it’s BYOB), close your eyes and you’re in a much swankier restaurant for a steal. We pay the ridiculously good-value bill and set off into the fog, properly warm inside.

Dinner for two with a soft drink and sparkling water came to €36.50

Vegetarian options: Good, typically more than 50 per cent of the (admittedly small) menu

Facilities: Gulag conditions in the market loos. Hold on till you get home.

Charity shops: The dos and don’ts of donating your clothes and belongings
6