Irish Restaurant Awards 2020: Vote for your favourite place to eat in Ireland

The public vote opens today. Take part and you could win a weekend at a Blue Book hotel 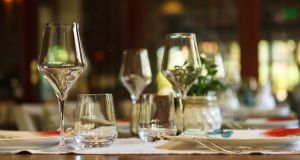 Diners can vote for their favourites when the Irish Restaurant Awards 2020 judging process begins today at noon.

Do you have a favourite restaurant, somewhere that is consistently excellent? Or maybe you encountered a front of house manager who went the extra mile to ensure you had a great time? Perhaps there is a chef whose food excites you every time you eat it? Now is the time to show your appreciation, by giving them your vote in the Irish Restaurant Awards 2020.

The public vote opens at noon on Wednesday in the first stage of these annual awards, run by the Restaurants Association of Ireland. Now in their 12th year, the awards recognise excellence across 21 categories, including best restaurant, best chef, best casual dining, best seafood experience, best world cuisine and best newcomer.

The online nominations account for 20 per cent of the first round of judging, with the remainder coming from a regional judging panel assessment.

Nominations can be made from noon today, until noon on January 22nd, at irishtimes.com/irishrestaurantawards. Last year, more than 90,000 online nominations were made by members of the public. Voters will be entered into a draw to win one of two prizes – two-night stays for two people, with dinner on one night, at Ireland’s Blue Book members, Viewmount House in Co Longford and the Mustard Seed in Co Limerick.

The county winners in each category will go forward to a series of regional finals in March. This will be followed by a further round of judging, in which a mystery guest inspection comes into play, before national winners are revealed at a gala dinner in Dublin in May.

More than 1,000 guests attended this event in 2019, when the six-course banquet at the Clayton hotel, on Burlington Road, was cooked by a team led by five chefs, each of them previous winners of Irish Restaurant Awards titles.

Last year the best restaurant award was won by Loam in Galway, which went on to win the first Michelin UK & Ireland Sustainability Award as well as retain its one-star ranking in the Guide.