This easy dish feels kind of fancy, almost restauranty, but still comes together in about 45 minutes 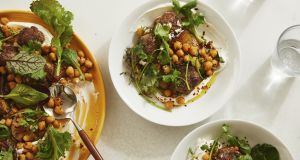 When it comes to food, I will forever favour crispy over saucy because saucy is the enemy of crispy, and crispy is the best and most pleasant thing about food. For example, I can’t stand when people squeeze lemon over my fried calamari or schnitzel, and think aubergine Parmesan is a waste of a crunchy piece of aubergine. (I have privately critiqued certain restaurants and dishes by describing them as “overwhelmingly saucy” or “too sauce-forward.”)

And so if you saw the word “meatballs” in the headline and began fantasising about a simmering pot of tangy tomato sauce or salty Swedish gravy, you have come to the wrong place – but do stick around, for a great alternative.

Let me just come right out and say it: These meatballs are not saucy. Instead, they are lightly spiced, pan-fried with a crunchy exterior and served with fat slices of olive oil-browned eggplant on a bed of warmed chickpeas. If that disappoints you in the sauce department, let me comfort you by mentioning that technically there is a sauce, but it’s a thick, spoonable sauce made of seasoned yogurt and it sits below (never over) the meatballs.

You may also notice the absence of any binding ingredients, such as breadcrumbs, egg or dairy. The good news is that this whole dish (except the yogurt sauce) is made in one pan. In fact, the success of each component depends on it.

The meatballs are cooked in the pan first, so the aubergine can brown in a mixture of olive oil and leftover fat. Then the chickpeas are tossed around in whatever is left (not to crisp, but to take the tinny edge off). It’s a dish built layer by layer: The ingredients are cooked separately not to annoy you, but to bring the most out in each one. The end result feels kind of fancy, almost restauranty, but still comes together in about 45 minutes.

Hopefully, by this point, I have so successfully distracted you with the appealing details of this one-pan dinner that you’ve forgotten all about the lack of sauce or traditional meatball ingredients, and you’re willing to give it a try. If so, my job here is done.

1. Combine lamb, fennel seeds, garlic and 1 teaspoon red-pepper flakes in a medium bowl. Season with 1½ teaspoons kosher salt and black pepper to taste, and mix until everything is well combined and the spices are evenly distributed.

2. Using your hands, roll lamb mixture into balls about 4.5-5cm in diameter, placing them on a parchment-lined baking sheet or plate. You should have about 12 meatballs.

3. Heat 1tbsp olive oil in a large pan over medium heat. Add meatballs – work in batches if your pan can’t comfortably fit them all without crowding – and cook, gently rotating them occasionally so they more or less brown on all sides while keeping a vaguely round shape, 8 to 10 minutes. (Do not stress about this part; they will be delicious no matter what shape they are.) After they are evenly browned and cooked through, transfer them to a plate, leaving the fat and any browned bits behind.

4. Add 4 tbsp oil to the pan and, working in batches, if needed, add aubergine slices in an even layer, seasoning with salt and pepper. Cook the slices, flipping them once, until they are browned on both sides, about 6 to 8 minutes. Add more oil as needed. After the aubergine slices are cooked and browned, transfer them to the plate with the meatballs.

5. Add remaining 3tbsp oil to the pan, along with chickpeas. Season with salt and pepper, and cook, shaking the pan and stirring occasionally, until chickpeas are nicely browned, 3 to 5 minutes. (They won’t exactly crisp; you’re just looking to take the edge off and get them nicely seasoned.)

6. Season yogurt with salt and pepper and smear on to the bottom of a large plate or serving platter. Top with meatballs, eggplant and chickpeas. Scatter with greens and coriander, and then squeeze lemon halves over everything before serving.