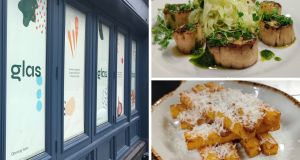 The trend for vegetables shows no signs of slowing down, and this month sees a new vegan and vegetarian restaurant opening just off Grafton Street in Dublin 2. Glas (Irish for green) says it will serve “innovative vegetarian and vegan dining that’s to everyone’s taste”, and dishes on the opening menu include spiced cauliflower ribs with sticky barbecue sauce and mojo verde, king oyster mushroom “scallops” with apple and fennel salad, and chickpea polenta fries with fermented black garlic mayo.

Glas owners Paul Rooney (formerly of The Green Hen) and Dualta Woods (of Woods Wines) say they think it’s something Dublin needs, and, together with chef Sam Moore (formerly of The Ice House and Old Street) plan to use seasonal vegetables and local produce to create “sustainably sourced gourmet food” in the old Chatham Brasserie site on Chatham Street. Glas opens at the end of the month.

It’s officially game season, and restaurants around the country have added venison, rabbit and wood pigeon to their menus. In Dublin, the Shelbourne Hotel will serve its game tasting menu from November 1st, with dishes such as wild game terrine, game pithivier and roast venison. It costs €60 per person or €100 with wine pairings, and should be booked in advance.

In Michelin-starred Liath in Blackrock, chef Damien Grey has added pigeon with amaranth and blackberries to the menu, while in One Pico Ciaran McGill is serving Wicklow venison with beetroot, chanterelles and last year’s elderberries. In Eastern Seaboard in Drogheda you can eat shortcrust rabbit pie with wholegrain mustard cream; Two Cooks in Sallins is serving venison with red cabbage, quince and Reblochon cheese; and newly Michelin-starred Bastion in Kinsale has wood pigeon with chestnut ravioli on the menu.

Barrows Keep restaurant has moved 15km from Graiguenamanagh to Thomastown in Co Kilkenny, to the premises that used to house Bassett’s restaurant on Marsh’s Street. The new location gives them a much larger space to work with, and has allowed them to incorporate a new wine shop, a wine bar and lounge, a restaurant in the back, a wood-fired pizza oven for eat in or takeaway, and outdoor dining in their stone-walled garden.

Owners Morgan VanderKamer and Stephen McArdle say their focus on local produce and great wine remains the same, and their new location right next to Thomastown train station means there’s direct access by train from Dublin, Kilkenny, Carlow and Waterford, so no driving needed.

The year’s Bram Stoker Festival, now in its eighth year of celebrating one of Dublin’s most famous authors, will include a food walking tour. The Bite of Dublin tour, led by historian Valeria Cavalli, will delve into lesser known facts about the Dracula creator, as well stories about his life in Dublin and the inspiration behind some of his writing, all while sampling different dishes and drinks.

The Bram Stoker Festival is on from Friday October 25th to Monday October 28th, and the food tour is on Monday from 3-6pm. Tickets are €43.55 and can be purchased at bramstokerfestival.com

Wine and Cheese fest in Swords

Eatyard’s Wine and Cheese Festival is coming back for winter and this time it’s taking over Jam Park in Swords from November 21st to December 14th. The summer festival saw 15,000 people come through the Iveagh Gardens in search of Brillat-Savarin and Burgundy, and Jam Park’s multi-level events space in North Dublin will allow for even more cheese boards, fondue and wine in every format. Tickets are priced at €15 for entry, wine on arrival, festive cheese and entertainment, and masterclasses can be booked separately. wine-n-cheese.com

Put it on the slate

Irish handmade slate homeware company Slated has launched a new product just in time for that season we wouldn’t dream of mentioning in October. The new cheese slates come with a name engraved in stone, so no question about whose cheese it is. They cost €38 and can be ordered online from slated.ie or from selected stockists nationwide.