Colcannon potatoes: So good we baked them twice

Pure comfort food and delicious as a side dish to roast lamb, chicken or ham 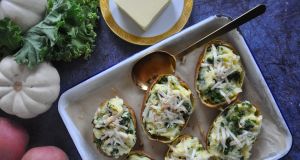 My instinct at this time of year is to write about colcannon, an ancient pagan dish originally made as a gift for fairies and spirits. I also consider mashed potato rippled with cabbage, with a pool of golden melted butter in the centre, to be an absolute gift. So not much has changed. I have made colcannon many different ways over the years and have shared the recipes, from kale colcannon to a buttery leek and ham hock version.

Similar to barmbrack, colcannon was believed to be a fortune-telling food, with hidden charms among the mashed potato. It was originally a treat and a delicacy, with coins, twigs and even a ring being folded into the pot signifying upcoming marriages, poverty or other future events.

It’s a very simple dish of mashed potato with leeks or spring onions, cabbage or kale, milk and butter. Pure comfort food and delicious as a side dish to Sunday roast lamb, chicken or thin slices of smoked salty ham.

Leftover colcannon can be refried in a pan till crisp and golden at the edges to make bubble and squeak – a delicious lunch or a breakfast option with a fried egg.

Having cooked every possible variation of colcannon, I really wanted to try something new for this Halloween and a little online research gave me everything from colcannon pizza to microwave colcannon casserole. So the message with this simple dish is that it’s best left as a classic and not fussed with too much. It’s beauty and deliciousness is in letting the simple ingredients, bound together with Irish butter, really shine.

So all I’ve done is baked the potatoes then scooped them out and mashed them, leaving the half shells of the potatoes for stuffing. Along with a little grated Gubbeen cheese, these loaded potato skins are a really delicious side dish or lunch on their own. They freeze really well, so make double the amount and save some for a busy day. Some crisp fried chorizo can be folded through the mash, too, and you could also use a different cheese.

Potato skins are full of fibre and crisp and delicious with the smooth mash. These also make a great vegetarian main course with baked beans.

1. Preheat an oven to 200 degrees. Wrap the potatoes in foil and thread them on to a metal skewer, if you have one. Bake for 50-60 minutes, depending on the size of your spud. Once it’s well cooked, remove from the oven and leave to cool slightly.

2. Cut each potato in half horizontally and scoop out the fluffy centre, keeping the outer shells as intact as possible. Mash the potatoes with the milk and a tablespoon of butter. Lay the potato shells on a baking tray.

3. De-stem the kale and chop it finely. Add a tablespoon of butter to a large frying pan and add the kale, along with a little splash of water. Sauté until wilted and bright green. Add the spring onion and cook for a further minute before folding this through the mashed potato, along with half the cheese. Season with salt and pepper.

4. Fill each potato shell with the colcannon. Top with the remaining grated cheese. At this point you can leave it to cool and place on the fridge or freezer, or else return the tray to the oven till the cheese is golden and bubbling, 15-20 minutes.