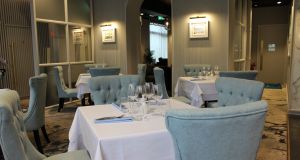 Once upon a time people went in there to lick their stamps. From this week, they’ll be going into the Old Post Office in Blackrock, Co Dublin, to lick their chops. Or even their chopsticks. (Ba-boom.)

The striking stone-fronted building in the centre of Blackrock in south Co Dublin, built in 1909 – once its post office, and later a Starbucks – has lain empty for some time. Now, after an extensive refurbishment over the past year, it’s reopening as a fine dining Chinese Sichuan restaurant, joining an array of eclectic new eateries in the suburban village.

The new team will open its doors to the public on Tuesday for dinner.

After walking through the original doorway, the space opens out into a surprising fresh-looking room, divided into areas with arches and glass panels. Bright, airy and spacious, with a pale palette of blues, greens and greys, the feel of the new Old Post Office restaurant is subdued, calm and discreetly plush.

Designed and fitted out by the DJI Group, the setting is European fine dining with Chinese touches – sculptures imported from China, a flower pattern on the carpet, bamboos on the terrace, china chopstick and spoon holders – and the food is strictly Sichuan.

Showing off the restaurant just before opening this week, general manager Paul Malone says its emphasis on high standard Sichuan cooking looks towards UK restaurants such as Hakkasan or Kai. He expects a clientele that’s a mixture of locals and Chinese diners – and he reckons the rack of Irish lamb served with a spicy Sichuan salsa will be one of its star dishes.

Beyond the entrance lobby is a small dining area and the bar, which stocks the legendary Moutai, a distilled Chinese spirit which has a reputedly distinct taste (it’s been described as having a “pure, mild, and mellow soy sauce-like after-taste”, while Malone describes it as sweet and smooth).

There’s also a lounge area for those waiting to be seated; from here you can see into the kitchen – a good spot to watch the chefs at work at the particularly impressive wok station.

The attention to details extends to the tableware: Degrenne French cutlery, WMF glasses in the dining room and Timeless cut-glassware in the bar. There are white and blue linen napkins, and the China is duckegg blue with a gold rim, imported from China.

The main dining room at the back of the building features a wall of windows overlooking the sea and across to Dublin Bay. This vista is echoed in the muted blues and greys . A small balcony will have a couple of tables, and swish looking partition doors can divide the room to create a more intimate private dining area.

The walls throughout feature about 20 paintings by artist Willy Redmond, of the local Blackrock area, and stretching to Stephen’s Green and Dun Laoghaire. The paintings were commissioned by one of the unnamed owners, who are two Chinese investors working between China and Ireland, and with seemingly deep pockets – the refurb, Malone estimates, cost close to €1.6 million. .

And as for the main attraction: Four Sichuan chefs, including head chef Yu Shuchen, lead the kitchen team. The emphasis is on tasting menus, priced at €70, €90 or €120 for dinner, or €45 at lunchtime (there is a la carte available also).