Baked 'paella' with prawns and chorizo makes a hearty meal 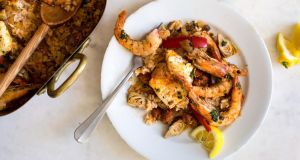 Every dish has a story to tell, but that story often isn’t what you expect or, indeed, want it to be.

Take paella, arguably the most famous of Spanish dishes around the world and the inspiration behind my recipe here. I thought, naively, that I would start my preamble with some historical notes about the humble origins of this Valencian star dish, and those would then naturally and smoothly lead me to my own adaptation of the recipe. In short, my modern take on a classic. In reality, things turn messier, and I find myself embroiled in an Anglo-Spanish wrangle.

The beginnings are more or less indisputable. Paella, named after the round, shallow metal pan in which the dish is cooked, has its origins in Valencia, on the Mediterranean coast of Spain. In the 10th century, the north African Muslims who ruled the region at the time started planting rice in the Albufera lagoon. Their love of saffron as a way of seasoning the rice and painting it a voluptuous gold was still there in the mid-1800s, centuries after the Muslim departure, which is when paella as we know it was established. It was a communal dish cooked by labourers over open fire, which gave it a distinct smokiness.

‘Adding chorizo to a paella should be an offence!’ said a commenter on Jamie Oliver’s website. On Twitter, someone suggested their version of fish and chips combines duck and aubergine

Other than rice and saffron, the original paella Valenciana would, strictly, have had contained rabbit meat, as well as chicken, possibly snails and a few types of beans. This was the version that was canonised as the “authentic” dish. It is safe to assert, though, that other versions were also developed as ways to use up whatever seasonal vegetables and proteins were on hand. Seafood paella, using the Mediterranean’s bounty of fish and shellfish, was also established and recognised alongside the land-focused variation.

The 20th century brought paella dispute, as Spanish food grew more popular beyond Spain and unorthodox variations began popping up. On top of that, a large number of tourists, a significant proportion of whom were British, arrived in Spain in the 1960s, demanding toppings that purists considered anathema. The renowned British food writer Elizabeth David published a recipe containing chicken, prawns and mussels, a surf-and-turf combination that was not so digestible for proud Spaniards. Still, David stood behind her version, claiming it was given to her by “a Spanish friend”.

The latest chapter in this delicate story came in 2016, when Jamie Oliver tweeted about his recipe for paella containing chorizo, adding fuel to a fire that had been recently ignited by the UK’s vote to leave the European Union, and inflicting extra insult on Spaniards who were already feeling tetchy about that decision. “Adding chorizo to a paella should be an offence!” said a commenter on Oliver’s website. On Twitter, someone suggested that their version of fish and chips combines duck and aubergine.

This is the level of emotion in the debate that I have unknowingly thrown myself into. My hope is that my “paella” (notice that I have used quotation marks for cover), with all its transgressions – from the chorizo to the chillies to the rectangular roasting pan to the baking in the oven instead of over fire – will somehow go unnoticed, and seamlessly join a proud tradition of adjustments and adaptations. In any case, a good story and a hearty meal are sure to be had.

Step 2 Add 90ml of the oil, the parsley, half the chilli, the roughly chopped garlic, a quarter-teaspoon of salt and a grind of pepper to the bowl of a food processor and pulse until finely chopped, scraping down the sides of the bowl as needed. Scrape half the salsa verde into a medium bowl and reserve the remaining salsa verde.

Step 3 Keeping the heads and tails intact, remove and discard the prawn shells and transfer the head-on prawns into the medium bowl with the salsa verde. Add the halibut, lemon juice, three-quarters of a teaspoon of salt and a good grind of pepper to the bowl with the prawns and gently toss to combine. Transfer to the refrigerator to chill while you continue with the rest.

Step 4 Add the chorizo, tomatoes, onion, tomato puree and the remaining sliced garlic, chilli and three tablespoons of oil to a large, deep metal roasting tin (about 40cm by 30cm) and toss to coat. Transfer to the oven and cook until the sauce is thickened and browned at the edges, stirring once halfway through – about 20 minutes.

Step 5 Stir the rice, artichokes, red pepper, paprika, saffron, 1½ teaspoons of salt and a good grind of pepper into the pan. Pour in the stock and hot water and stir well to combine. Cover with foil and return to the oven until the rice is cooked through and most of the liquid has been absorbed – about 25 minutes. Increase the oven temperature to 260 Celsius.

Step 6 Remove the pan from the oven, remove the foil, and top with the marinated prawns and halibut, gently pushing them into the rice without mixing it around too much. Return to the oven, uncovered, until the shrimp and halibut have cooked through – about 5 minutes.

Step 7 Spoon the reserved salsa verde over the paella. Serve warm, with the lemon wedges alongside. – New York Times

L’Gueuleton: A much-loved French bistro is bang on the money