New wine bar out to make a splash with fresh pasta, small plates and sharing dishes

Food File: A bone broth too good to be left unattended and Cork strikes gold with new fish restaurant 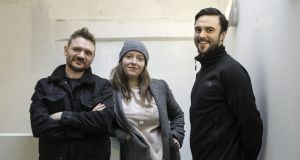 Allta, a new Dublin wine bar which has been more than a year in the making, will open in the city centre on November 19th. Chef Niall Davidson, who set up Nuala restaurant in London in the space now occupied by Richard Corrigan’s recently launched Daffodil Mulligan, is joined in the kitchen by fellow chefs Hugh Higgins (ex-Luna) and Christine Walsh (ex-Loam), and Ian Fitzpatrick is sommelier.

The premises is on the corner of Setanta Place and South Frederick Street. It is described as a “bright, cool, modern space”, with a handmade bar and shelving created by carpenter and former DJ Toby Hatchett. A private diningroom downstairs will open on December 1st.

The menu will feature house-made charcuterie, fresh pasta, small plates and sharing dishes, with a focus on sustainable Irish produce, and Davidson and Higgins have spent more than a year fine-tuning it, working from a test kitchen in Terenure.

Allta, which means wild and undomesticated in Irish, will open from Tuesday to Saturday, from 3pm to midnight, with the full menu available until 10pm and snacks between 10pm and midnight. allta.ie

I’d love to be able to tell you from personal experience that the new Boosting Beef Bone Broth from Sadie’s Kitchen is delicious, but I can’t, because all three packs I was sent to sample mysteriously disappeared from my fridge, in under two days.

The culprit gave it a resounding thumbs up, and it turns out this flavoursome beef stock – I hesitate to join the bone broth brigade – is so tasty it can be reheated and enjoyed as is. It can also be used as the base for soups, gravies and sauces. It is made with grass-fed beef from Irish farms, slow-cooked for 24-hours.

You’ll find it in selected branches of Dunnes Stores, SuperValu, and health food stores, with a recommended price of €4.50 for the 350ml pouch. sadieskitchen.ie

Cork city recently got a new fish restaurant that has an interesting and admirable ethos. Goldie, on Oliver Plunkett Street, sources its fish from the English Market, and also direct from Ballycotton day boats, from which it takes the whole catch – meaning whatever is caught goes on the menu.

Chefs Aishling Moore, former head chef at Elbow Lane, and Stephen Kehoe, executive chef for the Market Lane restaurant group, have also adopted a gill-to-tail approach with the intention of using every part of the fish, and have invented dishes such as crunchy fried fish spines served with house-made Japanese togarashi seasoning, and pollock collars cooked teriyaki-style.

Ray with fennel and langoustine butter sauce, and salt fish brandade with dillisk cracker and Churchfield tomatoes are more mainstream menu dishes, and the pricing ranges from snacks at €2, through small plates starting at €7.50, and main courses from €18. goldie.ie