Turmeric: what are the benefits and is it good for you?

From lattes to ice cream, smoothies and in the form of pills and powders, this spice is everywhere 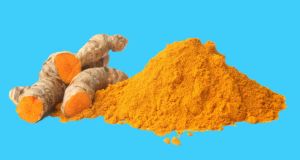 Turmeric, native to South Asia, is one of the fastest-growing dietary supplements. Photograph: iStock

Have you noticed lattes, ice cream and smoothies with a tawny hue? That could be a sign of a not-so-secret ingredient: turmeric. The botanical is omnipresent in health food aisles, in the form of pills and powders.

Turmeric, native to South Asia, is one of the fastest-growing dietary supplements. In 2018, products racked up an estimated €300 million in sales in the United States, a more than sevenfold increase from a decade earlier, according to a report from Nutrition Business Journal.

Brightening up the pantries of many homes in India, the spice is interwoven into daily life, the cuisine, and cultural and healing traditions. A member of the ginger family, it has been used in ayurvedic medicine for thousands of years. Apply turmeric to wounds, and it’s believed to fight infection. Mix it with milk, and the mind calms. Tint the entrance of new homes with a paste to welcome prosperity.

Turmeric is hailed for helping a host of conditions: high cholesterol, hay fever, depression, gingivitis, premenstrual syndrome and even hangovers

“Turmeric is auspicious and one of the most important herbs,” said Anupama Kizhakkeveettil, a board member of the National Ayurvedic Medical Association.

Sliced open, or dried into a spice, the Curcuma longa plant imparts its amber colour and earthy, bitter flavour to food like curry. The active ingredient captured in many turmeric supplements is curcumin. Curcumin, along with the other curcuminoid compounds, compose only about 3 per cent of the dried spice.

And bottles will often say turmeric on the front but list curcumin in the ingredients.

What do turmeric proponents claim as its benefits?

Turmeric is hailed for helping a host of conditions: high cholesterol, hay fever, depression, gingivitis, premenstrual syndrome and even hangovers. In ayurvedic medicine, it is believed to act as an anti-viral, anti-bacterial and anti-parasitic, and has long been used to help with diabetes, pain, rheumatism, osteoarthritis, memory and skin conditions like eczema.

“We use it for so many different conditions, it’s a time-tested herb,” Kizhakkeveettil said. “Unfortunately, our science doesn’t fit into complete randomised controlled trials. That is alternative medicine’s biggest challenge.”

Researchers sought to answer this by sifting through the available literature. In a 2017 paper in the Journal of Medicinal Chemistry, they concluded it’s fool’s gold. “There are claims that it can cure everything,” said Kathryn Nelson, a research assistant professor at the University of Minnesota and the study’s lead author. “To me, that is a red flag.”

Dr Amit Garg, a professor of medicine at Western University in London, Ontario, knew about turmeric’s medicinal use because of his Indian heritage. He knew first hand of its rich cultural significance too: on his wedding day, his relatives rubbed the spice all over him because it is believed to be cleansing.

After seeing the effectiveness of curcumin, in smaller studies, Garg and his colleagues decided to test it on a larger scale in hopes it would make elective aortic surgery safer by reducing the risk of complications, which include heart attacks, kidney injury and death. In the randomised clinical trial that followed, about half of the 606 patients were administered 2,000 milligrams of curcumin eight times over for four days, while the others were given a placebo. “It was a bit disappointing, but we couldn’t demonstrate any benefit used in this setting,” Garg said of the study, published last year in the Canadian Medical Association Journal.

In fact, there is not enough reliable evidence in humans to recommend turmeric or curcumin for any condition, according to the US National Center for Complementary and Integrative Health. Turmeric became a nutritional golden child partly because of its promise in laboratory studies — cellular and animal. Some research indicates that both turmeric and curcumin, the active ingredient in turmeric supplements, have anti-inflammatory, antioxidant, anti-bacterial, anti-viral and anti-parasitic activity. But this has mostly been demonstrated in laboratory studies, and, in many cases, the benefits of preclinical research isn’t observed in clinical trials.

According to Natural Medicines, a database that provides monographs for dietary supplements, herbal medicines, and complementary and integrative therapies, while some clinical evidence shows that curcumin might be beneficial for depression, hay fever, hyperlipidemia, ulcerative colitis, osteoarthritis and nonalcoholic fatty liver disease, it’s still too early to recommend the compound for any of these conditions.

Physicians say more research is needed. Dr Gary Small, a professor of psychiatry and biobehavioral sciences at the David Geffen School of Medicine at the University of California, Los Angeles, who studies curcumin’s effect on memory, sees a lot of therapeutic potential. He also states that existing research demonstrates curcumin’s biological effects.

Is there an optimal way for turmeric to be absorbed?

What may be affecting curcumin’s efficacy, doctors say, is that it is poorly absorbed from the gastrointestinal tract. In Indian cooking, turmeric is usually heated in a fat, like oil, which can increase absorption. Certain supplement manufacturers are also taking steps to improve this — curcumin’s bioavailability — by combining the compound with other components. For instance, a chemical found in black pepper — called piperine — is sometimes added to curcumin supplements in proprietary blends to increase its absorption.

Researching curcumin can be challenging because some blends have better bioavailability than others, and varying amounts of the active ingredient. “If you did the study over and over again but used slightly different preparations, you would probably have different results,” said Dr Janet Funk, a professor of medicine at the University of Arizona College of Medicine, who studies curcumin’s effect on bone.

Still, even if absorption improved, curcumin would not have any biological effects, Nelson contends. Turmeric may still have health benefits, she said, but they just may be from another compound or combination of compounds.

So is turmeric safe?

Consuming it by mouth is safe, up to 2g of turmeric daily for a year, and 4g daily of curcumin for a month, according to Natural Medicines. Turmeric aficionados who also use it as a face mask can relax too; the database indicates it is most likely safe to apply to the skin.

Doctors recommend that patients tell a physician they are taking turmeric. High doses of turmeric and its isolated constituents can have some rather unpleasant side effects, including diarrhea and nausea. Curcumin may also interact with anti-coagulants and anti-platelets, antacids, and drugs used for chemotherapy and to control blood pressure. While the spice is considered safe in food, therapeutic doses should be avoided during pregnancy.

How about all those turmeric lattes? Doctors say that sprinkling a little bit of the bitter spice into frothed milk doesn’t have proven health benefits

The US Food and Drug Administration does not test dietary supplements such as turmeric for safety and effectiveness but announced this year that it would improve oversight of the growing industry.

One study published in 2018 in Molecular Nutrition & Food Research, found that the cheaper the turmeric product, the more likely it was to have chemical compounds suggestive of synthetic curcumin; and products with turmeric root were more likely to have higher lead levels. One sample exceeded recommended limits for lead.

How about all those turmeric lattes? Doctors say that sprinkling a little bit of the bitter spice into frothed milk doesn’t have proven health benefits. But that doesn’t mean it isn’t delicious.

As for Garg, he is not closing the bottle cap on curcumin. To wit: he is in the middle of a randomised study with a different preparation and dosing to see if curcumin prevents the progression of kidney disease. “There are still many promising things about curcumin and turmeric,” he said. “I remain open-minded.” – New York Times

‘I might be crazy’: The people who set up new businesses during Covid
7

Tanya Sweeney: I wish I’d kept my naked pics. I feared they’d end up in the ‘wrong hands’
10