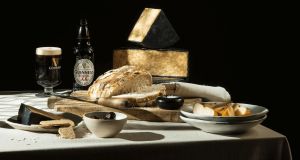 The world’s first official Guinness Cheddar cheese, produced under licence by a UK company, launches in Selfridges in the UK on Monday and will go on sale in Ireland later this month. It will be distributed by Cork company, Horgan’s Delicatessen Supplies.

The cheese, which contains 10 per cent Guinness, is made by Windyridge Cheese in Somerset, with a base cheese supplied by Wykes Farms Cheddar.

It has already been launched in the US, at the Fancy Food Show in New York last month, and will go on sale in 275 branches of Morrisons supermarket in the UK next month. Windyridge Cheese expects to more than double its annual output, from 200 tonnes to 500 tonnes, based on demand for the Guinness product.

To make the Guinness infused cheese, Cheddar is grated and mixed with the beer in liquid, concentrate and powder forms, before being re-pressed, cut and packaged, says Windyridge Cheese owner, Melvin Glynn. Glynn was also involved in the production of Guinness potato crisps, sold under the Burts brand.

The cheese, made with six- to seven-month matured Cheddar, has a much paler colour than others on the market made with added porter, and has a creamy, malty flavour profile that reflects the taste of the beer. The blend was arrived at following consumer sensory testing.

Declan Hassett, senior licensing manager at Diageo, says that the aim was to produce a cheese “with enough of the signature Guinness [taste] through it that people recognise it”.

The fact that the product is being made with a cheese that is not Irish will not be an issue, he believes. “For us, it is more about the consumer experience than where something comes from. We want to deliver the best quality experience to people. We did speak to Irish companies.”

Windyridge Cheese’s specialist expertise and distribution channels were factors in securing the three-year licensing agreement for the Guinness product. “We put a lot of time and effort into it, so we want to make sure we can get it out to as many people as possible,” says Hassett. “We want people all around the world to experience this and taste it, so you’re looking for companies that can do that.”

Horgan’s will initially supply the cheese to delicatessens and independent food stores, and discussions are ongoing with the aim of getting it listed with the retail chains. It will also be sold at Irish airports.

The brewing company is linked to a variety of food products produced all over the world, as well as in Ireland, where Lir chocolates produce a variety of Guinness products, Kettyle Irish Foods make a Guinness burger, and Loughnane’s of Galway manufacture a Guinness and leek pork sausage.