What an honour to have a dish named after you, but how did it happen? 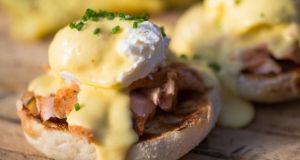 Perhaps the highest honour gastronomes can aspire to is having food named after them. Can you even imagine the thrill of having your name forever connected with your favourite dish or drink, something created for you or by your own fair hands? From savarin cake and tarte Tatin to Bloody Marys and oysters Rockefeller, the names of certain dishes offer clues about their origins and the people who became associated with them.

Because of food’s natural propensity for appropriation, fusion and adaptation, the exact source of famous dishes can be impossible to pinpoint. Eggs Benedict – perhaps the most perfect hangover cure ever invented – is a dish generally credited to a New York stockbroker named Lemuel Benedict. Apparently, he turned up for breakfast at the Waldorf Hotel one day in 1894 decidedly worse for wear after the craic of the night before. He put in a bespoke order of toast, bacon and poached eggs – and, crucially, requested a little jug of hollandaise sauce on the side. The story goes that Oscar Tschirky, the maitre d’, took a shine to Benedict’s order and adapted it to include muffins, ham and truffles before adding it to the Waldorf’s menu.

That story seemed to stick as well as hollandaise to a toasted muffin, but its authenticity has been questioned. In 1978, in an article entitled “Perfect Eggs Benedict”, Bon Appetit magazine named Mr and Mrs LeGrand Benedict as the source of the dish. It said the aristocratic New York couple ordered the ingredients to be served to them as breakfast at Delmonico’s sometime before 1894. The date seems to be a certainty, because that year Delmonico’s chef Charles Ranhofer published his enormous cookbook The Epicurean, which included a very nearly identical recipe for “eggs a la Benedick”.

Quite often the secret ingredient to finding the truth is hindsight; in 2007 the New York Times published an investigative article entitled “Was He the Eggman?”, which began with a New Yorker magazine account of the breakfast from 1942, shortly before the stockbroker’s death. The New York Times piece highlights the difficulty of definitively attributing food to its creator, and is worth a read over your next plate of eggs Benedict.