Milking the product for all it’s worth

In the US, concerns have been raised that there is too much fortification of food, though it is proving a life-saver in countries where the populations are malnourished 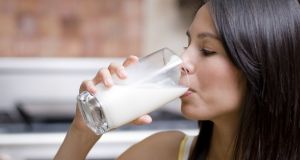 Some of the simplest labels to be found in supermarkets are those on fresh milk, such as those seen on packages from Avonmore, Connaught Gold and Premier Dairies.

The standard product contains just milk, and the National Dairy Council – an industry organisation that promotes dairy produce – has developed a packaging mark in the form of a green rosette that indicates that the milk or cream has been farmed and processed in the Republic.

On packaging for Avonmore fresh milk, for example, under the Nutrition heading, you will see the usual listings for energy (calories), fat, carbohydrates including sugars, protein and salt. But then it also lists vitamin B12 and calcium. What’s interesting here is that for a nutrient to be listed in this section, it must be there in a significant quantity, according to EU regulations.

So, even though full-fat milk also contains vitamins A, D, E and K as well as selenium, magnesium and zinc, these are not in high enough amounts to be listed on the packet.

Some Irish milk also has a lot of iodine, so much in fact that many EU markets will not take our milk. This is believed to be mainly because of the feedstuffs given to cows when they cannot graze outside, or in addition to hay, but the Department of Agriculture has written to the feedstuff manufacturers on the issue. (It’s a concern because our bodies need iodine but only in tiny amounts.)

The front of the packet says, “Peak freshness in every drop”, which sounds like it is still warm from the cow, but this is prime marketing-speak. As you will see on the back of the packet, the milk has been pasteurised and homogenised, which is done for our safety.

But Avonmore makes many different types of milk, including Lactose-free, Slimline, SuperMilk, 1 per cent light and Heart Active, which has added plant sterols to help reduce cholesterol.

Lactose-free milk is really just necessary for those who cannot digest lactose, the naturally occurring sugar in milk. That product lists lactase, an enzyme to help digest lactose, in its ingredients. It’s one of those cases where it is important for those with a real issue, but not necessary for others. Avonmore’s Slimline milk is identified as skimmed milk with added milk protein on the back, but who would be attracted to buy skimmed milk these days.

On the Supermilk label, the ingredients are listed as: whole milk, calcium gluconate, vitamin D3, vitamin E, riboflavin (B2) and folic acid (vitamin B9). So essentially, you are having milk with a few vitamins and some calcium added to it. But why let the dairy choose your vitamins when you could buy a good quality multivitamin and mineral supplement to suit your age, physical needs and lifestyle?

The needs of a 55-year-old man are very different from those of a 14-year-old girl. In the US, concerns have been raised that there is too much fortification of food, though it is proving a life-saver in countries where the populations are malnourished.

Causing some controversy by calling themselves milk too are all the non-dairy options such as those made from soy, coconut and almonds.

The company that really should take the prize for marketing-speak is Oatly, which is a Swedish company selling oat “milk alternative”. On the front it says, “No milk, No soy, No . . . whatever.”

On the side it says: “Start writing. It can be about absolutely anything, the weirder the better because people might find it interesting and actually start reading. Once you get them here, you have their interest so drop the nonsense and provide something of value or you might lose them. Like oats containing fibers (sic) called betaglucans (avoid big scientific mumbo-jumbo if possible) or that drinking oats is good for the planet . . .”

It reads like the instructions given to an advertising agency or a guide to writing copy for a food product.

Or is it postmodern copyspeak for hipster vegan millennials?