Making your own fish pie is super easy

This fish dish is as easy as pie 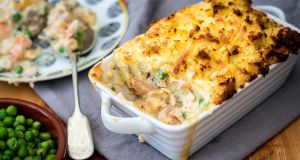 Fish pies don’t seem to as fashionable as they once were and are almost consigned to that status of a ready meal now. Photograph: iStock

Fish pies appear much in our shared food history, if only in the big houses of the Anglo-Irish seeking to emulate their British counterparts. They don’t seem to as fashionable as they once were and are almost consigned to that status of a ready meal now. Does anyone still make their own fish pie?

The British tradition of fish pie goes all the way back to the time of Henry I, crowned in 1100. Henry’s cooks rolled crust over an annual Christmas lamprey pie. Lamprey are like eels and were very popular to eat in the middle ages. Often, they would be bled and the blood would be used in the sauce. Though it may seem a tad revolting to be drinking fish blood, it is no different to using pigs’ blood to make black pudding.

The tradition of the “royal fish pie” continued down through the ages. Another fish pie required cooks to send the king two dozen pies containing 100 herrings. Might be a bit much for us today, though I do love a pickled herring.

In Cornwall, a tradition of sticking the heads of pilchards out of a baked pie still continues to this day. Like the lamprey blood, I don’t know if my kids would go for this one. Cruelty to fish (and other animals) is one of the major concerns of my nine-year-old, though it does not stop her eating them. “Fish have heads!” she exclaims, to amusement.

Making your own fish pie is super easy. Peel a kilo of potatoes and cook until tender. Strain and mash with 250g of butter and season with sea salt. Poach a kilo of mixed seafood (white fish, smoked fish, mussels or prawns in warm milk. Strain and thicken the milk with a roux (equal parts butter and flour).

When nice and thick add the fish back in with loads of green herbs, such as dill or parsley. You can add fried onions and garlic to the mix if you want. You can also use fish stock or wine to give the sauce an extra zing. Lemon zest also works well to bring acidity to the dish. Spoon your fish mixture into an oven-proof dish and top with the mash. Bake in the oven until mash is nice and crispy.