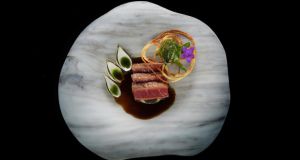 On the opening night of the West Waterford Festival of Food (April 20th-22nd), he is cooking a Chef’s Table dinner showcasing the ingredients supplied by some of the local producers he works with. The tasting menu will include wine pairings, sponsored by Wines from Spain, and the price is €95.

Other Friday night events at the festival include the Waterford Way Tapas Trail, a moveable feast winding its way through some of Lismore’s many restaurants, and a new event, Secret Suppers. For this, chefs Eunice Power, Shane McGrath (Cliff House Hotel), Arun Kapil (Green Saffron) and Chris McGowan (Wine & Brine), will each cook dinner for small groups of guests in four homes in the area.

Also on the opening night, Lily Ramirez-Foran of Picado Mexican Pantry will be cooking at a pop-up in Dungarvan Brewing Company. Saturday will offer opportunities to take part in seaweed or forest foraging, talks, tastings, panel discussions and shopping at the farmers’ market.

Journalist Catherine Cleary revives The Appetite Talks for a session entitled “Food Aisle or Food Isle” on Sunday morning, and Derry Clarke and Catherine Fulvio join Paul Flynn for a Lords and Ladles Sunday lunch in The Tannery. For the full programme see westwaterfordfestivaloffood.com.

Woodstock Cafe in Phibsborough has had an exterior facelift to mark its 25th year in business. Putting avocado toast on the menu has helped this institution hold its own in the increasingly hipsterish north city enclave. It is one of three thriving family-run food businesses that also include Moloughney’s in Clontarf, and Olive’s Room in St Anne’s Park.

The popular supper series at Olive’s Room, in the park’s Red Stables kicks off for 2018 on April 26th (when Buds of Spring is the theme), followed by further four-course fork suppers, using produce from the St Anne’s allotments, on June 28th, July 26th and October 25th.

Spanish Wine Week pops up on April 23rd to 29th, with events happening all over the country. At the Cliff Townhouse in Dublin on Friday, April 20th, head chef Sean Smith, whose wife is from Gran Canaria, will present a menu of delicacies from the island matched with wines from the region, introduced by wine writer Tomas Clancy.

In addition to wine dinners, tastings and talks, many wine stores in Dublin and around the country are running Spanish wine promotions for the week. For the full programme of events, see spanishwineweek.ie.