What’s really in your jar of hazelnut chocolate spread? 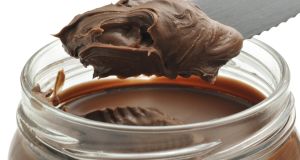 Nutella achieved a level of online infamy in recent years when a photograph was published clearly showing the amount of sugar in each jar. Not much has changed. Photograph: iStock

Bulking up food products with cheaper filler ingredients in an attempt to keep down costs is nothing new. It even helped to bring about the development of Nutella, a chocolate hazelnut spread.

Mixing hazelnuts in with cocoa to make chocolate go further has been popular in Italy since the late 19th century when cocoa was scarce for a time, according to Niki Segnit’s book The Flavour Thesaurus. It was originally sold as a loaf called pasta gianduja until Ferrero created a creamier spread to be sold in jars. That chocolatey mix was the forerunner of the Nutella sold today.

Nutella achieved a level of online infamy in recent years when a photograph was published clearly showing the amount of sugar in each jar. It took up more than half the jar and was topped off with palm oil. The surprise was how little hazelnuts and cocoa there was in the mix.

Not much has changed.

Sugar is still the main ingredient and makes up more than 56 per cent of the paste. Hazelnuts make up just 13 per cent. Ferrero is the world’s largest hazelnut supplier and buys about a third of those grown, according to Forbes. Ferrero is investing in plantations in Australia, Europe and South America in a bid to increase yields and availability throughout the year, it has reported.

The other ingredients include palm oil, skimmed milk powder, fat-reduced cocoa, soya lecithin, as an emulsifier, and vanillin, a synthetic substitute for vanilla, which is increasingly expensive. It is very popular as a flavouring and a perfume in the food and cosmetics industries. Nutella highlights on the side that it is “free from artificial colours and preservatives” but does not mention flavourings.

Ferrero says all of the palm oil it uses in Nutella is sustainably and responsibly sourced. Assuming that is true, it is hard to understand why it does not mention so on the label. It also credits palm oil with creating the creamy taste.

Tesco does an almost identical spread, for about half the price. It has slightly less sugar at 53 per cent, but about the same amount of hazelnut and cocoa powder.

Tesco’s product also notes that it was “blended in Belgium for a deep, chocolatey flavour”. I’d love to know how the latitude or longitude of the factory that made the mixture affects the taste.

“Rich and nutty,” it also says, and indeed that does sound rich and rather nutty. I’d say the flavour has more to do with the added rapeseed oil, maltodextrin and flavouring.

With sugar so far out of favour, it is tempting to try brands that don’t have any, such as Kelkin’s more expensive chocolate and hazelnut spread. It has much of the same ingredients as the other two, but gets its sweetness from maltitol, which takes pole position on the list.

Maltitol is an artificial sweetener that is about 80 per cent as sweet as sucrose and leads to a slower rise in blood-sugar levels. Unfortunately as it is a polyol, overconsumption can lead to an upset tummy, particularly in children or the elderly. Although maltitol generally has far fewer calories than sugar, this paste still has quite a lot. Nutella and Tesco deem a serving to be a 15g tablespoon, adding up to about 80 calories each. Kelkin’s 20g serving adds up to 100 calories. So swapping out sugar does not result in much of a saving in this case, perhaps because it is bulked out with whey powder, unlike the others.

There are far more calories in a spoon of Gu, which is made in Germany for the British brand. It has no mention of serving size, but it adds up to about 120 calories in a 20g spoonful. That seems like a lot, but check out the ingredients and you will see why. This spread has almost three times as many hazelnuts as other brands. They top the list and make up 35 per cent of the ingredients. Nuts are high in calories, but also highly nutritious. The second ingredient is sugar, but the final paste is just 38 per cent sugar, which compares very favourably against other brands. There is no palm oil, either, as it has sunflower, coconut and shea oil, in addition to cocoa butter. It is not the cheapest but deserves to be more popular.

Although Nutella remains a favourite, these days supermarket shelves are heaving with jars of varying quality, with everything from M&M to Malteser spreads.

With their long lists of colours, additives and powders, they make the simple spreads look far more appetising.