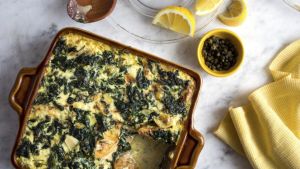 Step 1 Heat your oven to 240 Celsius. In a small bowl, mix a tablespoon of boiling water with the saffron and set aside for 20 minutes. (Longer is fine.)

Step 2 Cook the potatoes. In a large bowl, use your hands to mix the potatoes with two tablespoons of the oil, a half-teaspoon of salt and plenty of pepper. Spread out on two large parchment-lined baking trays and roast for 20 minutes, or until soft and caramelised. Set aside to cool.

Step 3 Cook the greens. In a large frying pan with a tight-fitting lid, heat two tablespoons of the oil over a medium-high heat. Once hot, add the anchovy and garlic and fry just until the garlic is starting to brown – 30 seconds to a minute. Add half the spinach, stir through for a minute to wilt slightly, and then add the remaining half. Cover for one to two minutes, to wilt some more, then remove the lid and cook for seven to eight minutes, stirring frequently, until all the moisture has evaporated and the spinach has begun to dry out. Raise the heat as needed to cook off the liquid. Turn off heat and stir in herbs. Stir in half the capers and set aside.

Step 4 Using your hands, mix the fresh and smoked salmon with a third of a teaspoon of salt in a bowl, separating the layers of smoked salmon in the process. Set aside.

Step 5 Make the custard. In a medium saucepan, whisk together the saffron and its soaking water, egg yolks, cornflour, lemon zest, a half-teaspoon of salt and plenty of pepper until smooth. Pour in the milk and cream and whisk until combined. Place over a medium heat and cook, whisking continuously to prevent the custard from scorching or sticking to the bottom of the pan. Cook for four to five minutes, until steaming and starting to thicken. Remove from the heat and set aside.

Step 6 When ready to bake, heat the oven to 200 Celsius. To assemble, start by layering half the potatoes at the bottom of a baking dish. (A deep 20cm-by-20cm square, 23cm round or 20cm-by-30cm rectangle will all work.) Top with half the spinach mixture followed by all the salmon. Top with the remaining potatoes and then the spinach. Pour the custard over evenly and bake for 25 to 30 minutes, or until the custard has set and is starting to brown. (If your custard seems dangerously close to the top of the pan, place it on a foil-lined baking sheet to catch any drips.) Remove from the oven and set aside for five minutes.

Step 7 In a small saucepan, combine the remaining capers with the remaining tablespoon of oil over a high heat. (The oil should just cover the capers, so you may need to add a touch more oil, depending on the size of your pan.) Fry the capers in the oil fcreamy potato gratin with smoked and fresh salmonor one to two minutes, stirring frequently, until the capers have opened up and become crisp.