With or without juice: Three big beers for the weekend 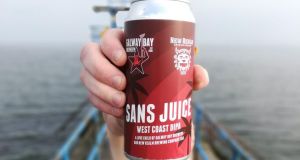 Double IPA: Galway Bay has made its 9-per-cent-alcohol Sans Juice with New Realm

As we head into summer, lighter and lower-alcohol craft beers are starting to steal the limelight. But there are still plenty of big, hoppy IPAs to get excited about, including three new double IPAs.

Many modern double IPAs have moved away from the old-school malty, piney and bitter style. Instead they follow the New England trends of soft bitterness, loads of juiciness and cloudiness, but still with a good deal more alcohol than a regular IPA.

Dot Brew’s new double IPA, Pursuit of Juicy, has a lovely blast of tropical fruit in the aroma. It pours cloudy, has a smooth body, and has enough carbonation to cut through the juicy sweetness. At first it tastes more sessionable than its 8.2 per cent, the alcohol heat quickly builds to make for a rich and layered beer with a clean finish.

Sans Juice, made by Galway Bay and New Realm, is a West Coast double IPA. It pours clear and has a big malty profile and lots of deliciously old-school citrus and pine hops. A big finishing bitterness rounds off the beer nicely and balances out its 9 per cent alcohol content.

O Brother’s Trajectories double IPA, at 8.2 per cent, falls somewhere between these two beers. Part of the brewery’s Off the Wall series, it is lighter bodied, with plenty of citrus and tropical fruit, pours with a haze – but is not cloudy – and is only mildly bitter.

If you’re looking to brush up on your knowledge of Irish beers, or just have a bit of fun, you could head to O’Briens’ craft beer fair in Naas, Co Kildare, on June 22nd, from 2pm to 6pm. It was a big hit last year, selling out quickly. This time around it has moved to the bigger venue of the Moate Theatre, where more than 20 Irish breweries, including Canvas, Black Donkey and Kildare Brewing, will all be offering samples – and plenty of chats. Tickets cost €15.