The actor wants to make her wines as natural as possible. The reality is more complex 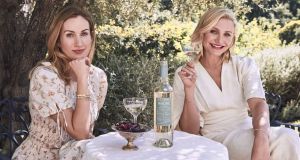 Cameron Diaz gives a happy sigh. “I’m really excited,” she says to her friend Katherine Power. On the table are two bottles of their new wine, Avaline, launched just last month. “We were mad for a while,” Diaz adds. “You were a little bit more mad than I was. You had some real anger.”

When Diaz and Power decided to make their own wine, they discovered there’s more to it than fermented grape juice. “No transparency, no labelling,” says Power, so shocked by what she found that she threw out all her wine.

The pair, speaking on Instagram, say they became determined to make a “clean”, chemical-free wine and are now, according to their publicist, on a mission “to bring transparency to the wine industry”.

I’ve been in the industry for close to 30 years, and this comes up periodically, just under different names. It’s a marketing exercise

They’re not the only ones. Out of nowhere has come Good Clean Wine, which “pairs with a healthy lifestyle”; the Wonderful Wine Company, which offers “wellness without deprivation”; and Scout & Cellar, a multilevel-marketing company that boasts of its “clean-crafted wine” and intends to “disrupt the wine industry and do better for the planet”, among others.

Dr Creina Stockley sighs when she hears this over Zoom. “I’ve been in the industry for close to 30 years, and this comes up periodically, just under different names” – “minimal intervention” is one she remembers. “It’s a marketing exercise.”

A pharmacologist and lecturer at the University of Adelaide, Stockley is a world authority on wine additives and processing aids, the heart of this issue.

Unlike the food industry, winemakers don’t have to list ingredients. This has opened a door for opportunists, who profit by claiming that other wineries fill their wines with noxious chemicals (they don’t).

The clean-wine companies are chasing a lucrative prize – a piece of the €45 billion wellness market. A Scout & Cellar recruitment video notes that 68 per cent of consumers will pay more for products if they’re free of ingredients perceived as bad; disparaging the competition is good marketing. It’s also working; the company reportedly made €16 million in 2018, its first year.

Strangely, for companies committed to ripping the lid off the wine industry, the clean-wine gang is pretty quiet about where their own wines come from, and most declined to be interviewed. Where many wineries love giving encyclopaedic detail about the hill where their grapes are grown, for example, the Wonderful Wine Company simply says its white comes from “France”.

“People are very interested in origin stories,” says Brian Smith, chief executive of Winc Wines, which launched the Wonderful Wine Co in May, “but the modern consumer is looking for, ‘How does this fit into my life?’ ”

Winc Wines, which Smith founded with Geoff McFarlane, is one of the United States’ most sophisticated online direct-wine businesses. Asked how Wonderful Wines offer “wellness without deprivation”, Smith says they use organic grapes “wherever possible” and don’t manipulate their wines.

If you’re wondering how @avaline came about, here’s our story! 💕 @katherinepower #avaline

Which is an interesting claim, because wine doesn’t make itself. If you drop Vitis vinifera grapes in a tub and leave them, they ferment, but what you’ll get is vinegar or cloudy, sour wine. Winemaking is both art and science, and, over centuries, winemakers have learned to prevent taints and spoilage, from using sulphur dioxide as an antibacterial and antioxidant to dropping egg whites into the wine to remove harsh-tasting tannins, a process known as fining.

Yet only 40 years ago a wine could be good one year and horrible the next. Since then an explosion of microbiology, chemistry and viticulture research has driven a quality revolution.

Today’s winemakers have an array of yeasts, antimicrobials and fining agents to choose from. Some function as ingredients that go into the wine, like extra acidity to perk up grapes from warm regions. Others are processing aids, mostly used to take things out of the wine.

You can’t grow grapes from Vitis vinifera without spraying eight to 14 times a year. The problem is mildew and then, at the end of the growing season, rot

Some have terrifying names, like polyvinylpolypyrrolidone (or PVPP, for short), but it’s the same binding agent found in aspirin tablets. It’s sometimes used to reduce colour, to achieve pale pink rosés. Such aids are legally defined and heavily regulated, and they don’t stay in the wine.

But all this research has also allowed commercial winemakers to create bland, homogeneous wines that taste the same each year, regardless of vintage variation. In the US, some mass-market red wines have grape concentrate added – the best known of which is Mega Purple – to give extra colour and sweetness. It’s illegal to add concentrate in the EU, where nothing can be added that changes the essential nature of a wine.

Many wine lovers are appalled by such practices, which render terroir – the origin, or sense of place – redundant. The backlash has led to a new category: natural wines. These are made by the “nothing added, nothing taken away” principle, usually from organic grapes.

But between natural and mass-market wines lies a vast and varied world. Just because winemaking tools exist doesn’t mean people use them – wineries don’t spend money on things they don’t need, and artisanal winemakers, in particular, pride themselves on their hands-off approach.

Stockley says, in any case, that modern wine needs less intervention than in the past, partly because winemakers have “learned to make things smarter and better”, but mostly because of improved grape growing. Some winemaking aids are no longer permitted; until 1997, animal blood could be used for fining. Ferrocyanide, which Scout & Cellar claims is a common additive in commercial wines, was a processing aid that’s no longer legal.

So why not list ingredients? Dr Ignacio Sánchez Recarte, secretary general of the Comité Européen des Entreprises Vins, which represents the EU’s wine sector, says it’s because wine isn’t made by an industrial process. While, say, a commercial bakery works to a strict, unchanging recipe, winemaking decisions change each vintage. Asking a small winery to update labels every year would impose an economic burden.

“If you have anything in the wine with potential allergenic effects, you are obliged to indicate that on the label,” however, and he adds that the wine sector understands modern consumers want transparency. Legislative change is under way in the EU.

“I expect that by the end of 2022 there will be labels on wine,” he says, adding that they will be either traditional labels or elabels. They will list ingredients, not processing aids – nor will they show if the producer used pesticides.

“Now you’re opening up a can of worms,” says Jamie Goode PhD, wine writer and author of wine textbooks. “You can’t grow grapes from Vitis vinifera without spraying eight to 14 times a year. The problem is mildew and then, at the end of the growing season, rot.”

Most winemakers talk obsessively about their land and heritage, so if these details are missing or vague, the wine could be private label

One of wine’s paradoxes is that the most prized, expensive grapes come from regions prone to fungal diseases, which can only be treated with commercial pesticides or, for organic growers, applications of copper sulphate.

“It’s all about the concentration,” says Goode, adding: “There are strict regulations concerning their use and concerning residue levels that are permitted. Wine is one of the most regulated and safe products there is.”

Promising ultraviolet-light therapies are being trialled that may eliminate pesticides forever, but, for the moment, there is another potential way to avoid them. It’s to farm in drier, warmer areas with less disease pressure, like Languedoc, in southern France – birthplace of the Wonderful Wines white.

There are plenty of warm regions producing grapes at lower cost. California also has a grape glut right now, and there’s more wine in tanks than many wineries know what to do with. Some use the best for themselves, then quietly sell the rest to what’s known as the bulk wine market, where everything from commodity grapes to certified organic wines are sold.

Wineries also use their excess to make on-demand wines for buyers. In a twist, these “exclusive” wines often come from big wineries; despite being thoroughly conventional, they can even be marketed as “minimal intervention” or “clean”, because these are meaningless terms.

It’s a type of wine known as private label, which can be highly profitable because the seller doesn’t have vineyards or wineries to maintain. Most winemakers talk obsessively about their land and heritage (try and stop them), so if these details are missing or vague, the wine could be private label, although some mass-market brands also omit this information.

Unfortunately, all wine, however it’s made, contains a dangerous chemical: alcohol. No matter how sustainably the grapes are grown nor how consciously it’s made, there is no wine that won’t deliver a hangover if you drink too much.

Wine is not a wellness potion. It’s a snapshot of time, a manifestation of the place and the people who made it, which works a special magic when paired with friends and food.

When it comes to clean wine, the only thing being cleaned is your wallet. – Guardian