The Co Longford distillery has big plans and an experimental bent, including using peat 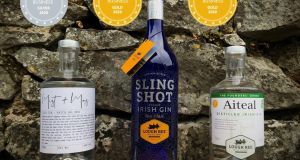 Michael Clancy was a happy man when I met him; Lough Ree Distillery had just won three medals, two gold and one silver for their gins at the World Gin Masters competition. Lough Ree is in Lanesborough, Co Longford, was set up by Sheila Clancy and her brothers Michael and Peter. They have ambitious plans for a new distillery and visitor centre in the town. “The distillery is behind where we want it to be, between the lockdown and nervousness over Brexit,” says Michael. “But the site is ready to go. We have the equipment ready and planning permission.”

As with most distilleries there are plans to produce whiskies. For the moment Lough Ree buys and ages a limited-edition series of whiskey called The Bridge. But for now the real interest lies with their three award-winning gins. Here they use four different distillates, made from Irish whey: mint, citrus, classic juniper and peat. Peat in gin? “This area is all about peat,” says Michael. “I tried macerating it and it tasted great, with an interesting texture, so we made a distillate, and the mouthfeel came through.”

The distillery’s core product, Slingshot (€45), has won nine international awards. It is a delicious gin, aromatic and fresh, lightly spicy with a unique texture. The latest gold medal-winning release is Aiteal (€38). This is made using Irish whey and juniper, and can claim to be the only 100 per cent Irish gin on the market. They also produce the lovely, fresh and aromatic Mist & Moss gin (€54 from Armadapantry.com) in collaboration with the Armada Hotel in Spanish Point, using botanicals from their own farm and Moy Hill Farm, and some foraged in the Burren. “They are three very different gins, but we are very proud of all of them,” says Michael.

Lough Ree has reopened its gin school in Goatstown, Dublin. “It gives us coverage in Dublin and was going well until Covid.” It also sells a kit that allows you to create your own gin, complete with six bottles of distillates.