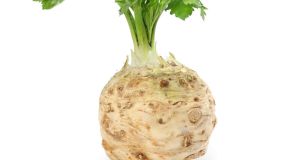 What to do with celery? Photograph: iStock

Instead of spending days in laboratories trying to chemically extract and enhance vegetables and plants to taste and look like meat, I suggest we get back to the stove and learn to cook them as they are and appreciate the length of time they take to grow from seed to swede, or whatever it is we are eating at this time of year. Perhaps then they may taste as satisfying as the meat that many of us so desire.

Cooking celeriac, particularly the way I cook it, is akin to a class in Zen meditation, or at least a dose of a little mindfulness.

Two ways to to cook celeriac

First trim the bottom off your celeriac, so it can sit flat in a frying pan or roasting tray. Some chefs like to peel it at this stage, but I like the resulting organic shape when it’s not peeled.

Place some oil and butter in a frying pan. When the butter starts to foam, add the celeriac flat side down, into the pan. Add a few herbs, such as sage or rosemary.

From this point, you can take it two ways: the easy way and the hard way.

The easy way will leave time for actual mindfulness. It involves placing the celeriac into the oven to roast. I usually check it every 10 minutes, basting it with foaming butter. You can also add a little reduced chicken stock, to create a rich glaze.

The hard way, which requires you to stand over the stove and baste the celeriac in the pan with the foaming butter, will have you tied to the cooker for at least an hour.

Some would argue that the two processes are the same, save that the latter hurts your back more. However, cooking the celeriac slowly in the pan, turning it so its edges catch the ever so gently burning butter, works very well. This technique, which we generally reserve for meat, is what brings the humble celeriac to divine heights.

The Maillard reaction, that complex process that occurs when we sear meat, can be achieved by cooking any vegetable in the same manner.