A perfect piece of Americana in New Hampshire 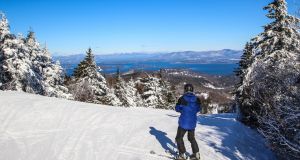 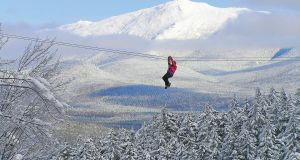 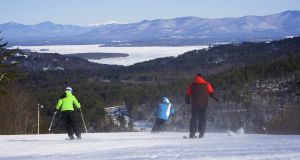 The slopes of White Mountains

“Dress like a pro – at least you’ll look the part”, was my cousin’s snappy advice as she surrendered her pro winter gear for an upcoming trip to the White Mountains of New Hampshire.

She remembered the truth: It was five short years since my last (third) attempt at skiing. She lived in Switzerland at the time and I had exaggerated my yearning to hit the slopes of Zermatt.

As the chairlift creaked skywards so did my terror. After a wobbly thrust from the lift on to a red run, I snow-ploughed robotically to the closest fir, snapped the skis off, threw them over my shoulder and began the long, tortuous foot-slog-and-slide all the way down the mountain.

Never again, I said. You can have your new year’s après-ski craic in Chamonix and your PyeongChang. I’m just more of a sun holiday person anyway, I said.

But it didn’t sit right. Skiing is cool. And fun. Apparently.

New Hampshire would fix this. It’s where they Live Free or Die. In fact, it’s the only US state that doesn’t require adults to wear seat belts.

New Hampshire is the birthplace of America’s 14th president (Franklin Pierce), its first astronaut in space (Alan Shepard) and Tupperware. It hosts the first presidential primary in the United States and despite its tiny size, can make or break a candidate.

As if that wasn’t arresting enough, every year in September and October, “leaf peepers” flock to the White Mountains for the idyllic New England pursuit of fall foliage viewing.

When we arrive in late March, via Boston, New England’s maple syrup production has ramped up, the crisp snow is knee-high and lake Winnipesaukee in the eastern part of the state is still frozen.

Conditions are ideal for skiing which makes it the perfect introduction to movie-like New England inn-style living.

The Christmas Farm Inn and Spa in Jackson, for example, is set into a hillside (on 3 Blitzen Way, natch) and is just as seasonal as it sounds. Think deep, snug armchairs, four-poster beds, wide porches, soothing rocking chairs and Cookie, the golden retriever. And there’s turkey and stuffing on the dinner menu all year round.

It’s hard to leave behind all that glowing warmth – especially when the plan is to head into the wilderness for a bumpy off-road adventure in the back of a monster Swiss army truck or zipline 213 metres over the icy Pemigewasset river.

But after snowmobiling 20 miles of trails around the base of Mount Washington and thawing out, I’m planning my return. Possibly as a leaf peeper, dreaming of those kaleidoscopic autumn views and spying a moose from the wooden lodges along the Appalachian Mountain Club’s hiking trails.

Whether it’s kayaking and ziplining adventures you’re after, or just taking off on the Kancamagus Highway with its covered bridges, Shaker-style wooden churches, sparkling lakes and waterfalls, this is the perfect piece of Americana.

By the time we arrive at Attitash Mountain Resort, Zermatt has come back to haunt me and I consider feigning injury. But I look the part so I must carry on. To the magic carpet lift.

Luckily for this fourth-time beginner, the season is about to end so there are no small children around to throw me off my lurching snowplough game.

There is still lots of snow as the resort has nearly 100 per cent snow-making coverage. Crucially, my instructor John is a kind, patient former teacher from Maine who will only allow me to go down the mountain one way.

Together we conquer my chairlift phobia and by the end of the afternoon, I’m zipping around. A ski trip for new year’s craic might even be on the cards.

Aer Lingus, operates a twice daily service to Boston from Dublin and daily service from Shannon, where guests can preclear US immigration before they board their flight. Fares start from €169 each way and include a 23kg checked bag.

Miscarriages and IVF: chasing a rainbow baby (and when to stop)
6