Coeliac Awareness Week: here are tips on eating out and great and easy recipes to make at home 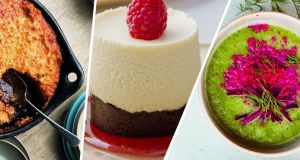 Coeliac Awareness Week, which runs all this week, aims to raise awareness about the condition. There are about 12,000 people in Irealnd diagnosed, but many more have the condition – some estimates say up to 40,000 people suffer from the disease but are who are undiagnosed.

What exaclty is coeliac disease and why does it cause so many problems? Simply, it is a result of intolerance to gluten, the protein found in wheat, barley and rye, where eating a slice of cake or bread could kick of a bout abdominal pain, diarrhoea or worse.

Gluten is in bread, biscuits, cakes, pasta, beer, pizza and in many manufactured foods where gluten is contained in the ingredients such as soups, sauces, gravy, salad dressings, crisps, chocolate, sweets and ready-meals. Some people with coeliac disease are also sensitive to the protein found in oats.

There are a wide range of possible symptoms and effects for someone with the disease who digests gluten – which can range from mild to severe. These include diarrhoea, bloating, abdominal pain and weight loss.

Often spelled “celiac” in the US, it is an auto-immune disease, meaning the body’s immune system attacks itself. When people with the condition consume gluten, it results in damage to the lining of the small intestine, which stops the body absorbing nutrients properly.

Being diagnosed as coeliac requires a complete review of the larder, to eliminate foods containing gluten, and also a new vigilance when eating outside the home.

So today, on International Coeliac Day, here are tips on eating out and gluten-free recipes for tasty – and sweet – dishes from Yotam Ottolenghi, Rachel Khoo and more

Dos and don’ts of eating out for coeliacs

There are a couple of days in the Swedish year when the mercury in the thermometer hits temperatures that could compete with a warm summer day in southern Europe. And, on those days, nothing beats a refreshing chilled soup. Preparation times is about 15 minutes and the dish needs to be chilled for 2-3½ hours.

Method
1. Start by making a granita. Blitz the cooked beetroot with the yoghurt in a blender. Pour into a large, flat-bottomed container and place in the freezer. After 30 minutes, thoroughly stir through the mixture. Place back in the freezer for another 2-3 hours, or until fully frozen.
2. Meanwhile, blitz the cucumber and dill in a blender until very smooth. Add the vinegar and season to taste with salt. Place in the fridge to chill.
3. When ready to serve, julienne the remaining beetroot into thin strips. Use a fork to scratch the granita up into snow. Check the soup for seasoning, then divide it into bowls. Top with the granita, some beetroot matchsticks and the sprigs of dill.
Top tip: The colder a dish, the more you need to season it. Freezing dulls the taste and, therefore, extra seasoning is required.
Get ahead: The soup will keep for a day in the fridge. The granita will keep for a week in the freezer in an airtight container. Take out of the freezer five minutes before serving to make it easier to fork up the crystals.

Method
This is a wonderful meal on an autumn day, served with a crisp green salad. The slow-cooked chicken is packed full of flavour and the crust – gluten-free, rich and corny – makes for a welcome (and lighter) change to a heavier mash.

You can make the chicken well in advance if you want to get ahead: it keeps in the fridge for up to three days or can be frozen for a month. You want it to go into the oven defrosted, though, so it will need thawing out of the freezer.

The batter needs to be made fresh and spooned on top of the chicken just before the dish gets baked, but it then can just go back in the oven. It can also be baked a few hours in advance – just warm through for 10 minutes, covered in foil, before serving. I love the combination of the chicken and the corn, but the chicken also works well as it is, served on top of rice, in a wrap or with a buttery jacket potato.

1 Heat the oil in a large sauté pan, for which you have a lid, on a medium high heat. Add the onions and fry for 8-9 minutes, stirring a few times, until caramelised and soft. Reduce the heat to medium and add the garlic, harissa, paprika, chicken, 1 teaspoon of salt and a good grind of black pepper. Cook for 5 minutes, stirring frequently, then add the passata and tomatoes. Pour over 350ml of water, bring to the boil, then simmer on a medium heat, covered, for 30 minutes, stirring every once in a while.

2 Add the peppers and chocolate and continue to simmer for another 35-40 minutes, with the pan now uncovered, stirring frequently, until the sauce is getting thick and the chicken is falling apart. Remove from the heat and stir in the coriander. If you are serving the chicken as it is (as a stew without the batter), it’s ready to serve (or freeze, once it’s come to room temperature) at this stage. If you are making the corn topping, spoon the chicken into a ceramic baking dish – one with high sides that measures about 20cm x 30cm – and set aside.

4 Pour the butter into a blender with the corn, milk, egg yolks and three-quarters of a teaspoon of salt. Blitz for a few seconds to form a rough paste, then spoon into a large bowl. Place the egg whites in a separate clean bowl and whisk to form firm peaks. Fold these gently into the runny corn mixture until just combined, then pour the mix evenly over the chicken.

5 Bake for 35 minutes, until the top is golden-brown: keep an eye on it after 25 minutes to make sure the top is not taking on too much colour: you might need to cover it with tinfoil for the final 10 minutes. Remove from the oven and set aside for 10 minutes before serving.

For the chocolate base, melt the chocolate and butter in a bain marie (in a bowl set over saucepan of gently simmering water). Once melted, remove from the heat and allow to cool slightly. Stir the egg yolk through the chocolate.

In a large mixing bowl, use an electric whisk to whisk together the egg white, sugar and salt, until stiff peaks form. Add a spoonful of the egg white mixture into the chocolate to loosen it. Next fold the remaining egg white mixture through the loosened chocolate. Transfer to a square baking tin and bake in the preheated oven for 15 minutes until risen in the centre.

In a separate bowl, set over a bain marie, whisk together the sugar, whole egg and egg yolk, whisking for five minutes until pale and doubled in size.  Remove from the heat and combine with the melted white chocolate, mixing until smooth. Set aside to cool for five minutes.

Soak the gelatine leaf in a bowl of cold water for five minutes to soften fully.  Take 50ml of the milk and heat to just below boiling in a small saucepan.  Immediately, take the soaked gelatine and squeeze out any excess water before stirring the gelatine into the hot milk. Allow to cool before adding to the white chocolate and egg mix. Stir in well.

Stiffly whip the cream and mix one third of the cream into the egg and white chocolate mixture to loosen it. Then lightly fold in the rest of the cream.

Use each ring to cut out a ring of chocolate cake (keeping it inside the base of the ring). Next, line the inside of each ring with strips of plastic. Divide the white chocolate mousse equally between the lined rings. Refrigerate and leave to set in the fridge for at least four hours or preferably overnight.

Release the mousse cakes from the rings, by running the tip of a sharp knife around the chocolate ring bases to first loosen them. Carefully slide them out of their rings and peel away the plastic. Decorate and serve chilled.

Work from home in a picture perfect Wicklow country garden for €1.35m
3

Tell Me About It: ‘Why am I the one always left alone?’
5

Dublin hotels offering discounts of up to 50%
6

Michael Harding: The woman at the checkout said my mask made me look constipated
9