Vegetables and fruit replace bread, pasta, cereals and rice as foods to be eaten most 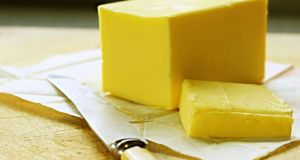 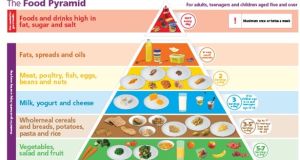 Butter has all but disappeared from the food pyramid, which has been revised and reissued by the Department of Health, after more than 20 years in use in Ireland as a visual representation as part of what constitutes a balanced diet.

A single “portion pack” of what could be butter has replaced the large block that appears in the previous version of the food pyramid.

The department issued an information leaflet, Healthy Food for Life, relating to the new pyramid, which makes no reference to butter, instead advising consumers to “choose mono or polyunsaturated reduced-fat or light spreads”.

The updated food pyramid was announced on Tuesday by Minister for State for Health Promotion Marcella Corcoran Kennedy, and is part of the department’s Healthy Ireland initiative - a national framework for action to improve the nation’s health and wellbeing.

She said the launch “provides a suite of resources for dieticians, health professionals and teachers. In the months ahead, we will provide additional training resources for healthy eating. We need to place a greater emphasis on prevention - and a healthy diet is essential for better health and wellbeing.”

Vegetables and fruit have replaced bread, pasta, cereals and rice as the foods we should be eating most.

Meanwhile, the apex has been detached from the rest of the pyramid to signify that snack foods and fizzy drinks high in sugar, salt and fat “are not needed for good health”, according to the guidelines that accompany the visual.

Marianne Walsh, senior dietician with the National Dairy Council, said: “Butter is renowned for its delicious taste, but due to its high fat content our understanding is that the advice is the same as all of the ‘Fats, spreads and oils’ group - to consume sparingly as part of a balanced diet because it is high in calories.”

Consultant dietician Paula Mee said butter should be represented in the food guide.

“Butter, and all fats, deserve space in our diet and should be represented in a food guide, but it’s the balance of our fats that’s most important.

Ms Mee also believes the food pyramid is too simplistic. “People find it difficult to work out what particular shelf represents a ‘combination’ food – a slice of lasagne made with pasta, beef and cheese sauce, or a flapjack made with oats and sugar and coconut oil.”

Vegetables and fruit now replace cereals, bread, pasta and rice at the bottom of the pyramid, signalling that these should be consumed most often (five to seven servings a day), and in the greatest quantity.

Wholemeal and wholegrain are now flagged as the most beneficial way to consume bread, cereals, pasta and rice, which have moved up to the second level of the pyramid (three to five servings a day).

Milk, yoghurt and cheese are the next level, and it is recommended that three servings, the equivalent of a 200ml glass of milk, a 125g carton of yoghurt, or 25g of cheese, should be consumed daily.

The guidelines specify that “reduced fat or low-fat varieties” of milk and yoghurt varieties should be chosen, and that these should be eaten more often than cheese.

Meat, poultry, fish, eggs, beans and nuts remain at the fourth level of the pyramid, to be eaten twice a day, with a recommendation that lean meat without skin should be chosen, and that consumption of processed meats such as bacon and sausages should be limited.

Protein should also be consumed in the form of eggs, beans and nuts, according to the guidelines.

“Use as little as possible” is the direction when consuming fats, spreads and oils, and consumers are advised to “choose mono or polyunsaturated reduced fat or light spreads” and to use in “in very small amounts”, such as one teaspoon of oil per person when cooking.

The change at the top of the pyramid, in the snack food zone that includes crisps, sweets, biscuits and fizzy drinks, is significant.

Previously, the foods at the apex of the pyramid were a up-to-once-a-day option.

However, now “there are no recommended servings for top shelf foods and drinks”.

“The top shelf includes foods and drinks high in fat, sugar and salt. These are not needed for good health and should not be consumed every day,” the guidelines state, advising that these should be eaten only once or twice a week.