Hate hotel food? Here’s how to iron up a toastie and make kettle pasta

When you spend half your life on the road, cooking for yourself can stave off madness 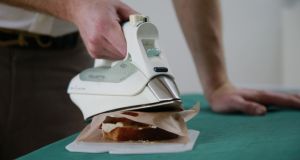 Room self-service: I’ve ironed myself a toastie during my more than 400 nights in hotels over the past three years. Photograph: Nick Bradshaw

“Can you get someone to look into my fridge? It’s freezing my cheese.”

So begins one of my many conversations with the friendly staff, or staffly friends as I’ve come to think of them, in one of the endless number of hotels I’ve visited in the past three years: 478 nights and 26 cities in nine countries across four continents is the latest count. My job in IT consultancy has me on the road (and staying in hotels) a lot. My non-staffly friends often compare my life to the film Up in the Air, but the reality is more like Anomalisa meets The Shining.

Spending so much time in a hotel changes you. You exist in a space where you have no ownership or responsibility of consequence. You can spend $50 on room service gin and chips. You can see how long you can do the plank for. You can go for a run around the carpark to get your steps up. You can lose the remote control for the television. You can get lost on the hotel stairwell. You can play the ukulele in your underpants. You can cry doing karaoke. You can eat a jar of peanut butter with a pencil. No one will ever know.

I take Denzel’s Washington’s lead from the film He Got Game, where he grills a cheese sandwich using a hotel iron with Wonder Bread and Easy Singles in a brown paper bag

But with a total lack of responsibility comes a mild form of madness. So how do you stop yourself from losing it altogether? For advice, I turned to one person whose steps I’ve been following for years: Anthony Bourdain, the late celebrity chef and travel documentarian.

As Bourdain said in an episode of The Layover LA: “You might ask yourself why when you are in a perfectly good hotel, with perfectly good food, would you want to cook? Well ‘cause you can. I mean there is a kitchen. Plus if you are like me and you are travelling all the time, and really doing the layover thing and staying in a lot of hotels, isn’t it nice to do something kind of vaguely normal? Little things like cooking for yourself, you know, that makes a big difference … Little thing like… scrambled eggs. I feel like a human being again.”

Following Bourdain’s advice, I’ve started trying to cook in these rooms to make me feel like a human again.

First things first: I avoid the breakfasts buffets. The scrambled eggs aren’t real. I now cherish my morning moments slurping granola out of an ice bucket.

To cook without a kitchen (the only equipment I usually have in my hotel room is a microwave, a fridge and an iron), I take Denzel’s Washington’s lead from the film He Got Game, where he cooks a grilled cheese sandwich using a hotel iron with Wonder Bread, Easy Singles and Pam oil spray in a brown paper bag.

But I want to actually cook. With time to kill in New York City, I head to Whole Foods to spend a considerable chunk of my paycheque on salad bar tomatoes and rocket. I get pizzeria mozzarell (the a is dropped in the US) from Zabar’s, an 85-year-old deli on 2245 Broadway. I buy a fisherman’s knife and spork from camping co-op REI, and toaster sandwich bags. I thought they were a joke, but they are not; they are magic.

Then I search for techniques online. Most research leads me back to Denzel making his sandwich with an iron, but I’ve enough to go on.

Safety first: clean the iron. Iron your shirts for the week ahead in case of spillages. Clean the iron after cooking for the next guest, so as not to incur fines from your staffly friends.

Next for the fillings. I make my first sandwich with the salad bar tomatoes, my mozzarell and a smear of hummus for flavour. Grilled sandwiches also need a lacquer for a crispy crust. Denzel uses an oil spray (Pam). But for my toasties, I look to food writer Tim Hayward for inspiration.

I out my mayonnaise-covered sandwich into the bag, then iron it close to bathroom sink, lest I set off the fire alarm. I turn the sandwich every two to three minutes

In a recent Twitter post he described as “something of worth that can leave the world a better place when I’m gone”, Hayward delivered the holy grail of toasted sandwich techniques: smear mayonnaise on the outside of the bread. According to Hayward, “The oil fries the sandwich, the egg kind of omelettises into an amazing crust, and whatever other crack-like ingredients they put in that stuff transfer their mojo.”

So, I place my mayonnaise covered sandwich into the sandwich bag, heat the iron to max temperature, then iron the sandwich close to bathroom sink, lest I set off the fire alarm. I turn the sandwich every two to three minutes.

Alone in my hotel, eating my toastie, I am happier than I’ve been in months.

It works so well I do it again the next night. In the meantime though I’ve used the iron on my shirts, and forget that it is full of water, which results in a steamed sandwich that’s a bit of a sweaty mess.

My confidence building, I start to experiment with main courses. Since visiting Japan, I have been obsessed with Ramen, but it’s a mission to make, especially in a hotel bedroom. For a start I’ve no dashi or kombu, miso or soy. It could just end up as noodles in water.

My starting point is Korean-American chef Roy Choi’s instant butter-based ramen recipe from the New York Times. He suggests pimping some instant ramen by sliding an egg into the hot broth, followed by butter and slices of cheese, with an optional scattering of chopped scallions and sesame seeds on top.

So I go to Whole Foods again for fresh noodles, a box of instant ramen liquid, seaweed and Iberico ham. I wrap the ham in seaweed. The liquid won’t boil in the microwave in my hotel room, but I cook it on the highest heat before adding the noodles for two minutes.

A small kettle from Target is a revelation for steaming dumplings and baos, though it has been known to turn room 338 into a steamy spa

The recipe calls for American cheese: I add Dubliner wedges, which Kerrygold distributes in the US. The broth isn’t hot enough to poach the eggs, so I whisk them together in a cup, add more butter and cook separately in the microwave.

I make the ramen twice in 10 minutes. I eat it over a sink by lamplight, and it feels restorative.

Since these initial successes, I’ve purchased some of my own equipment that I now take with me on my travels. A small kettle from Target has become a “pasta kettle” to cook tortellini and gnocchi. Using the iron as a hot plate, I’ve toasted pine nuts and made pesto with basil, parmesan and a spray of Pam. The kettle is a revelation for steaming dumplings and baos, though it has been known to turn room 338 into a steamy spa.

A travel waffle iron is being put to use with Trader Joe’s instant falafel mix, to make what I’m calling fawaffles. With cornmeal flour, I’ve also made cornbread waffles with avocado, tahini and chilli honey for breakfast. A section of my suitcase is has become a ziplock bag pantry, with enough ingredients to keep me sated for months.

Anthony Bourdain was right. Cooking for yourself makes you feel human again, whether in the comfort of your own home, or the sterile embrace of a business hotel.