Making a meal of it, with Irish lamb, tomatoes, blue cheese and apple wine at National Organic Awards 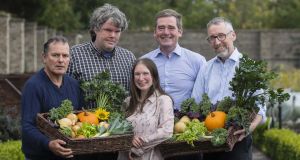 Wexford-based Irish Country Meats won the overall award today at this year’s Bord Bia National Organic Awards. The sheep meat processor was one of six organic food companies who got the nod from over 200 entries from Irish organic food producers.

The awards are run every second year by Bord Bia in association with the Department of Agriculture, Food and the Marine. Irish Country Meats MD Joe Hyland said the company takes “great pride in being the leading innovators and organic ambassadors in the lamb space in Europe, but to be recognised in the home market in this way means a lot to us”.

At Bord Bia’s offices in Dublin today, two Kilkenny food businesses also received awards: Riversfield Organic Farm, in Callen, Co Kilkenny, won the Chef’s Choice award for its cherry tomatoes; Riversfield’s owner Vincent Grace said they are “proud of our tomatoes. Their versatility has them making appearances in local cafes as well as in Michelin-starred restaurants.” Highbank Organic Orchards and Distillery, from Cuffesgrange in Kilkenny, picked up the Direct Selling Award for their fortified apple wine, Sack No. 3 Pommeau vintage 2016. Rod and Julie Calder-Potts have been developing products to add value to their apples, which they describe as “pip to sip”.

A partnership between the Little Milk Co in Dungarvan, Co Waterford and the company producing Cashel Blue cheese in Tipperary, led to an Export Award. Since joining forces the company has sold the new organic Cashel Blue to retailers and hoteliers worldwide.

Slí Eile Housing Community Organic Farm in Mallow, Co. Cork, which grows organic vegetables, won Business in the Community Award, for helping those who work the farm recover and rebuild their lives after mental health challenges .

As well as the overall organic award, Irish Country Meats also won the Retail Award for its Good Herdsmen organic half leg of lamb, which was “driven by consumer demand for an organic option,” said MD Joe Hyland.

Minister of State for the Department of Agriculture, Food and the Marine Andrew Doyle said the quality of Irish organic produce in the awards showed Irish organic food can compete on the world stage, the sector has a bright future and promised a strategy for its future until 2025 before the end of this year.

Meanwhile, Bord Bia ceo Tara McCarthy said the broad variety of producers and products at the awards “demonstrates why Irish consumers are increasingly choosing to include organic in their weekly shop”.

The National Organic Awards, now in its ninth year, aims to recognise achievements and raise the profile of Irish organic food and drink manufacturers and growers.

How can I tell my husband it is over and I want a divorce?
9