Tramore, Co Waterford gets a new restaurant next week when Peter Hogan and Jumoke Akintola Hogan begin serving lunch at their latest venture 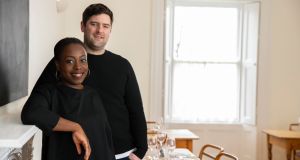 “The food and wine, and the people in the room, will be the embellishment.” Peter Hogan and Jumoke Akintola Hogan, the couple behind the Fish Shop restaurants in Dublin, are describing the pared-back aesthetic of their first restaurant outside the capital, which opens next week.

“It is just a nice, clean, bright space. All those things which hopefully will be reflected in the food and the wine,” Hogan says.

Beach House, a handsome Victorian building in the seaside town of Tramore, Co Waterford, has a long history as a guesthouse and restaurant – most recently as the Pine Rooms – and under its new owners, is about to begin a new chapter, as a restaurant with rooms, and eventually a bar.

Behind the house’s newly painted cream exterior, there are two plainly decorated dining rooms seating 30 at well lived-in pine tables, and all set to welcome first guests next Wednesday. Upstairs there are several guestrooms, earmarked for renovation in phase two of the project, and currently where the couple are “camping out”.

The basement level will in time allow them to double the capacity of the restaurant, or open a bar, as the leasehold property comes with a full licence. In the garden, there are three new raised beds awaiting planting with vegetables and herbs for use in the kitchen.

It’s a property steeped in potential, and a huge step up from the converted garden shed in Blackrock Market in south Co Dublin where the couple set up a fish and chip stall in 2013.

“At the time, we really enjoyed it. We used to cycle in there, peel a few potatoes, by hand for a long time, and sell out, and then cycle home. It was a very simple life,” Akintola Hogan says of their initial foray into the food business.

The couple met in London, where they were both secondary school teachers and, before coming to Dublin to set up the fish and chip business, they ran a street food stall specialising in smoked food.

Wind the clock forward a few years, and they had become owners of two quite different restaurants, sharing the name Fish Shop, minutes apart in Smithfield, Dublin 7. In December, they relinquished the lease on the Queen Street branch, where they were serving a set dinner menu of four courses in a 16-seat room, to open this new venture in Peter’s home town of Tramore.

Fish Shop in Benburb Street, the more casual of their two Dublin businesses, remains open, offering what many customers, including Irish Times restaurant critic Catherine Cleary, believe to be the best fish and chips in the capital. “All the things we had on the menu in Blackrock Market we still serve in Smithfield today – fish and chips, mussels, our fish burger, and the green salad,” Hogan says.

Despite Tramore’s jaunty seaside appeal, don’t go to Beach House expecting to order fish and chips. The menu there will be more in keeping with the deceptively simple, flawlessly executed classics the pair cooked and served – just the two of them – to upwards of 30 people in Queen Street each evening. “We had to turn the tables there, just to make it viable,” Hogan says.

At Beach House, fish and shellfish will be at the heart of their menu again, but there will be meat and poultry too – Comeragh lamb for the opening weeks – and Akintola Hogan will be cooking this protein for restaurant customers for the first time.

“It’s been really interesting working with fish for this length of time. My cooking style is quite light and simple and bright, and I’d really like to bring these qualities to meat,” says the self-taught cook who has taken to the pro kitchen like a natural. “It suits my personality, the kind of order and organisational side of things that’s required to run a kitchen,” she says.

Initially, Beach House will open only for lunch, Wednesday to Sunday, with last orders at 3.30pm. They say this will allow them to run the business without additional staff, as they did in Queen Street.

“We made a decision to open it with just ourselves and to concentrate on the offering and the space and ease our way into it.” Hogan says. “It’s still very much our new baby,” Akintola Hogan adds.

By May, they expect to be adding dinner service on Fridays and Saturdays, but lunch is their initial focus and where they say they see great potential for trade in the seaside town. “We love lunch ourselves, and the dining rooms are really lovely in the day time, so we’d like to get as many people in here during the day as possible.”

In fact, the couple love lunch so much that it was the focus of their wedding day in London in 2016. “The ceremony was at 10 o’clock, which I think was quite a surprise for our Irish guests. We had a registry office wedding in Islington and then took a Routemaster [vintage double decker bus] to St John for a four-hour lunch and then we walked to a pub nearby. It was good fun, the kind of fun we’d like people to have here,” Akintola Hogan says.

In Tramore, their lunch menu will have six or seven savoury dishes, based on what’s good that day, with a mixture of smaller plates and two main courses, a trio of desserts (made by Hogan, whose almond tart is legendary), and a cheese course. “It’s a more relaxed experience,” Hogan says. “People can just drop in and have a plate of food and a glass of wine, or if they want a bigger experience they can order the entire menu, to share.”

The wine list will have six whites and six reds, available by the glass and carafe, specifically chosen to accompany that day’s menu, as well as an extensive list sold by the bottle. Hogan says the list will be composed of “really good examples of wines that are familiar to people. That was the brief we set ourselves, so people would be relaxed ordering them. We are not looking to dumb down the wine list; it’s just about making it accessible to people.”

Sourcing ingredients for the menu from the local area has been a priority. “We’re only getting to grips with it and definitely have a lot more work to do, but there’s definitely a more direct connection [with producers] when you’re outside of the city,” Hogan says.

They are also keen to work with what’s on their doorstep. “Backstrand has an amazing wealth of sea vegetables and sea herbs, a bounty of great things. We were actually serving samphire from there in Queen Street for the past two years – Pete’s dad was picking it for us,” Akintola Hogan adds.

But there is one ingredient that, for the moment, they will still be travelling to Dublin to stock up on – potatoes from McNally Family Farm . “We’re still experimenting. At the moment, Jenny [McNally’s] potatoes that we were using in Dublin, still win out. So, until we find one better, we’ll be loading the car up.”

Eat more shellfish – we are blessed in Ireland with some of the best shellfish in the world. Mussels, cockles and clams are good year round, are great value and easy to cook. Just steam them open with some wine or Irish dry cider, add herbs of your choice, and a knob of butter.

For the freshest fish, try to buy whole fish and ask your fishmonger to fillet it for you. Look for bright eyes and red gills. Fresh fish should look appetising and smell of the sea.

Don’t be afraid to try a new fish. Sustainable delicious flat fish such as megrim are a great alternative to sole and gurnard is great in a stew or curry.

Roasting a whole fish such as brill, megrim or, for a real treat, turbot is a fantastic sharing centrepiece to a meal. Ask your fishmonger to prepare the fish for you. Just season it and add some olive oil and butter, then roast it in a hot oven until the fish comes away from the bone. A 1kg fish will feed three to four people.