First look at 9 Below, Dublin's most luxurious bar 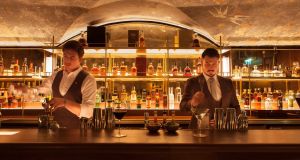 Counting the seats at the bar, 9 Below holds 80 people with many quiet corners and alcoves.

If hell is other people, we need a whole new word for the chaos of St. Stephen’s Green in the run up to Christmas. Panto, shoppers, carol singing, queues – the area becomes a tightly wound grid of stress and mayhem.

Yet venture down the stairs of 9 Below, a concept bar in the basement of the Hibernian Club, and it feels like entering a different country. A calming waft of Jo Malone English Pear & Freesia greets clients in the hallway. In the four rooms of the bar, there are accents of luxuriant brass, art deco crystal and walnut throughout; the work of interior designers O’Donnell O’Neill (House, 37 Dawson Street, Roberta’s).

Counting the seats at the bar, 9 Below holds 80 people, but with its many quiet corners and alcoves, it’s less a place to be seen in, and more a bar for those who prefer their libations intimate low-key.

At the centre of the bar is a show-stopping glass cabinet featuring gleaming amber bottles of high-end whiskey. It’s the latest venture of renowned businessman Alan Clancy and the Nolaclan group, who are also behind House, Xico, The Oak and The Fence in Mullingar.

Its wood panelled walls, mid-century leather and velvet furniture and low-key lighting evoke the rarefied atmosphere of the gentleman’s club. Sexy not stuffy. Masculine, yet – despite its golf-related moniker – not blokey (there are Jo Malone products stocked in the bathroom, after all). Dark, but not dingy. Think seductive, sonorous, and with serious top notes of Don Draper.

The devil is very much in the detail: drinks are served with reusable glass straws. Whiskey comes less on the rocks and more on a single globe of ice. There are four non-alcoholic cocktails, none of which are a common-or-garden fruit juice blend.

The plan, such as it is, is to provide, in the words of General Manager Stuart Courtney, a five-star hotel bar without a hotel. 9 Below, it is hoped, will become a close cousin to the American Bar of the Savoy in London, the NoMad in New York or the Connaught Bar in London. 70 per cent of the seats will be reserved; the rest will be used for walk-ins. Much like a five-star hotel bar, there will be a full service.

“My feeling is, if you go to a lovely, Michelin-starred restaurant, and you wanted to continue that experience, where do you go for a drink before or after?” says Courtney. “Around this time of year, you could go to a hotel bar, but here you don’t have to queue or fight for a seat.”

“We want to be the sort of place you’ll come for a special occasion or business dinner,” says Courtney. “Whoever comes in, we want them to have an experience – to give them something they won’t find anywhere else. We haven’t hiked the prices for the sake of it – we’re selling the sort of products here that no-one else is doing. We think there’s a market there for people who want to have something you can’t normally access.”

9 Below hope to foster a regular clientele, and anticipate that their crowd will be largely over 35, with a blend of local executives, high-end tourists from nearby hotels, and the odd visiting celebrity. And with the area set for further injections of glamour thanks to the arrival next year of developments like 10 Molesworth Street and exclusive eatery The Ivy, Courtney isn’t worried about the famously fickle ways of Dublin drinkers already spoiled for choice.

“That’s the great thing about the Dublin bar scene,” Courtney says. “Whether it’s a dive bar or a place like this, there’s room for everyone.”

‘Moving overseas is daunting, but he took it in his stride’: An Irish woman walks for her dad
6