What do steak and toasted marshmallows have in common?

Now we know: Answering the foodie questions you didn’t even know you had 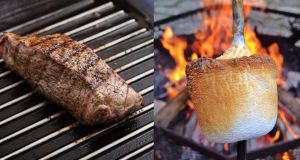 It’s not just blackened steaks and singed marshmallows that we’re talking about here; the list of foods whose flavours rely on the Maillard Reaction is long and lovely.

Have you ever cooked a steak to perfection? That’s actually a complicated question, as we’re each entitled to our own idea of what encompasses a perfect steak. For me, the pink interior of the steak must be balanced with an outer crust of caramelised juiciness, the deeper in flavour and darker in colour the better. The secret of this perfection is a little more complex than simply caramelising or searing the meat; the real magic lies in something known as The Maillard Reaction.

The Maillard Reaction is a chemical reaction between amino acids and sugars when they’re faced with heat, named after French chemist Louis-Camille Maillard who first identified this effect in 1912. It’s not just blackened steaks and singed marshmallows that we’re talking about here; the list of foods whose flavours rely on the Maillard Reaction is long and lovely. Fried onions; roasted coffee; toast; golden brown chips and crisps; the malted barley so essential in whiskey and beer; black garlic and even chocolate.

But what exactly is The Maillard Reaction? In an article on SeriousEats.com, the food designer Eric Schulze explains that it is “many small, simultaneous chemical reactions that occur when proteins and sugars in and on your food are transformed by heat, producing new flavours, aromas, and colours.”

It’s sometimes called the “browning reaction” but this doesn’t quite do it justice. “The important thing about The Maillard Reaction isn’t the colour,” writes the food scientist and photographer Nathan Myhrvold in The Modernist Cuisine, “it’s the flavours and aromas. Indeed, it should be called ‘the flavour reaction.’” Myhrvold goes on to explain that what begins as a simple reaction sparked by heat between amino acids and sugars quickly becomes rather complicated. “The molecules produced keep reacting in ever more complex ways that generate literally hundreds of various molecules.”

To effectively implement The Maillard Reaction on your next steak dinner, Myhrvold recommends removing as much water from the surface of the meat before cooking by blotting with a kitchen towel, and then cooking it over a fast, high heat such as on a very hot griddle or grill. But be careful not to burn the exterior which leads to bitterness; a cook who knows the difference between The Maillard Reaction and a burnt steak is a wise cook indeed.