Now We Know: Answering the foodie questions you didn’t even know you had 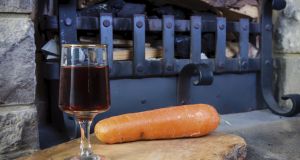 You know Dasher, and Dancer, and Prancer and Vixen . . . but what do they and their pals Comet, Cupid, Donner, Blitzen and Rudolph actually like to eat? I’ve always left out a stick of carrot, but is that really what reindeers fancy on their epic trek busting time barriers and magically exceeding sky speed limits across the world on Christmas Eve?

I put in a call to Kevina O’Connell, the manager of Glendeer Pet Farm (glendeerpetfarm.ie) outside Athlone, to find out more. In their 28 years of being open, this family business have gotten up close and personal with plenty of reindeer in their time. O’Connell points out that Santa’s reindeer are probably all female, seeing as male reindeer lose and regrow their antlers every year whereas the females always keep their antlers. But what do they like to eat?

“Obviously, the reindeer get a lot of special magic food in the run-up to Christmas,” explains O’Connell. “We don’t know exactly what it is that Santa and his elves feed the reindeer, but there’s definitely a secret ingredient in the mix that helps them fly.”

Deer also love a grey moss called lichen. They eat a lot of that back home in the North Pole, and Ireland’s readily available equivalent is hay. Before they make their big journey on Christmas Eve, O’Connell explains, the reindeer would be filled up with hay which apparently has all the nutrients they need to be able to fly around the world.

If people have some hay lying around, great; by all means leave a bale out on Christmas Eve. But Santa doesn’t expect anyone to go out especially and buy hay at this time of year. “Carrots are great for reindeer,” confirms O’Connell. “They love them and they give them energy. And, of course, carrots help them to see at night.”

Glendeer Pet Farm will close today to give their donkeys, goats, sheep, emus, puppies and red deer a little hibernation time from the public, and they’ll reopen on Paddy’s Day. Happy Christmas!